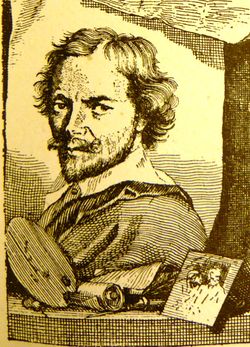 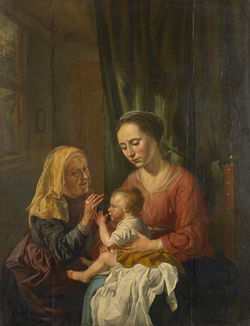 Dirk was one of the few painters who joined the Anabaptists. He was at first a silversmith, but after a journey through Germany he felt drawn to painting and engraving. Of his works only a few have been preserved. One of his pictures, "Mary and her Mother and the Christ child," is owned by the Rijksmuseum in Amsterdam.

Several of Dirk's children were well-known artists, including Samuel Dirksz van Hoogstraten (1627-1678), a Dutch Golden Age painter and poet, and Jan van Hoogstraten (1628-1654), also a Dutch Golden Age painter. Jan traveled to Vienna in 1652 to work at court and died there in 1654. He was buried in St. Stephen's Cathedral. Son François van Hoogstraten (1632-1696) was a painter, poet, bookseller, printer, and publisher. He left the Mennonites about 1660 to become a Roman Catholic. Jan and David van Hoogstraten, sons of François, who were respectively a book dealer at Gouda and a medical doctor and senior master of a Latin school at Amsterdam, are known as poets.