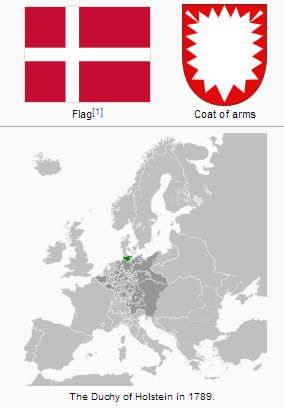 The duchies of Holstein and Schleswig were divided under Christian III (died 1559) in such a way that the Duke of Gottorp and the king had sole jurisdiction over a part of each, while some districts remained under joint jurisdiction. The difficulties resulting from this arrangement were of benefit to the spread of Mennonitism.

With dukes Hans and Adolf, the king issued severe edicts against the Mennonites who had settled in Oldesloe and in the east at Steckelsdorf as powder manufacturers, linen weavers, and cover makers. In the cemetery "thor Krempe" (today Altenkrempe) there was a great number of "such false rabble," including women and girls, who "live well and some among them go with golden chains." At the "lower mill" near Lütjenburg a meeting of 900 had taken place at night. This is the complaint of the Statthalter Bertram von Anevelde (Ahlefeldt) in 1554 to the king, whom he besought to expel them not only from this district, but also from Lübeck. The memory of events in Münster in 1535 was still fresh. Duke Adolf proposed to his brother that they issue an edict against dangerous heretics to be posted on all church doors. They were thinking in particular of Bartolomäus of Ahlefeldt, who was their common subject, and upon whose estates at Fresenburg near Oldesloe Mennonites were living. In 1533 and in September 1555 an edict was issued by Christian III warning that Anabaptists, because they caused insurrection, should not be employed (see Denmark).

On their account Adolf ordered a church inspection in 1557 and had a pastor deposed who was suspected of Anabaptist leanings. These measures were not unsuccessful. Nothing more is heard of Mennonites in East Holstein. Nevertheless Menno Simons could spend the last years of his life, 1554-1561, quietly in Wüstenfelde.

In the south of Holstein there were a few Mennonites in the towns of Pinneberg and Wandsbek who were not subject to any marked hostility. In the next century Fresenburg is again on the scene. Very suddenly in July 1656 the order was issued by both rulers to Johann von der Decken, the owner, to remove "the ungodly rabble" from his jurisdiction within a week, on penalty of a fine of 3,000 talers; for "as soon as they get enough air and opportunity, they will rebel against the God-ordained government, revolt, and draw entire nations into insurrection and ruin, as the examples of the previous century show." Three families felt this blow; Jan de Buyser, the "Huiskoper" preacher of Hamburg, drew up a petition for them, pointing out the toleration the ancestors of these families had enjoyed. They were very likely permitted to remain.

In the southwest of the duchy, many Mennonites immigrated in the 16th century to the marshes of Krempe and Wilster, and were of no little importance to the country. Actual places of freedom, where they were granted special privileges, were set up in 1623 in Glückstadt and in 1601 in Altona where they were valued for their industry in the crafts. In the north the marsh borders on Dithmarschen. The assumption that Anabaptists had also gone there is supported by the "Landrecht" of 1567, article 2 of which opposes the Anabaptists. In addition a royal decree of 1637 forbade secret conventicles in the south of Dithmarschen.

Mennonitism in Holstein gradually declined. The descendants of the immigrants joined the state church; e.g., Jacob Lammerts, the only Mennonite living in Rendsburg after 1800. In 1834 distinctions in active and passive franchise on the basis of creed were removed. A regulation of 1863 permitted Mennonites to settle anywhere in the duchies.

A large number of refugees from the Danzig area settled in the Schleswig-Holstein area in 1945-1946. The Kiel congregation was organized in 1949.