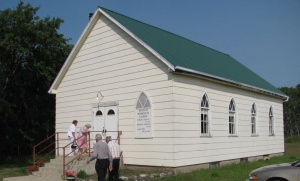 Hoffnungsfelder Mennonite Church, Mayfair, Saskatchewan, is a rural church with accompanying cemetery, located on two acres of land (0.809 ha) at: 52.988°N 107.611°W (SE-25-45-12-W3). This is about 1 km west of the village of Mayfair, Saskatchewan on highway #324. In the latter half of the 1920s Mennonite emigrants from the Soviet Union pioneered on land provided by the Canadian Pacific Railway. On 15 July 1928 a “Bruderschaft” (brotherhood) meeting held near the town of Rabbit Lake, Saskatchewan, decided to form one larger congregation called the Hoffnungsfelder Mennonitengemeinde. The Mayfair members joined with other groups of immigrant Mennonites at Glenbush, Rabbit Lake, Mullingar and Bournemouth to form the five-branch Hoffnungsfelder Mennonitengemeinde (Fields of Hope Mennonite Church). This multi-location church structure resembled the congregational format the members knew from Imperial Russia and the Soviet Union. This five-branch congregation should not be confused with the two-branch congregation to the east consisting of Petaigan and Carrot River also named Hoffnungsfelder.

In that same year Mayfair elected Nickolai N. Friesen and Johann Toews as their pastors. Both were ordained on 23 June 1929 by Ältester (Bishop) Johannes Regier from Tiefengrund Mennonite Church. During these early years the members worshiped in homes. In 1929 Mayfair started Sunday school, “Jugendverein” (youth meetings) and a Saturday German School with Peter Duerksen as teacher. In 1933 the congregation purchased the land on which to build and registered the church with the province under the name Bethel Mennonite Church. In 2012 the church was still registered under that name, but to Mennonite Church Saskatchewan it is Hoffnungsfelder Mennonite Church, Mayfair; it has also been popularly known just as the Mayfair Mennonite Church.

With volunteer labour the building was completed in August 1934. It was blessed with outstanding acoustics. Later the congregation added a barn and a basement in 1946. About 1934 Mayfair separated from the other Hoffnungsfeld Mennonite churches. Johann Toews resigned from the ministry in 1937 and the Nickolai N. Friesen family moved to Black Creek, British Columbia in 1939, leaving the congregation without a pastor. In June 1940 Mayfair rejoined the Hoffnungsfeld Mennonite churches and then received visiting ministers from the other churches. From time to time there was an absence of ordained pastors in the wider Hoffnungsfelder congregations. This led to the appointment of lay Sermon Readers who were elected to read sermons at services when no ordained pastor was available. Beginning about 1945 and continuing to about1964, Peter J. Toews served as Sermon Reader in the Mayfair church.

The Great Depression and better economic opportunities in other provinces caused many members to leave in the late 1930s and 1940s. At this time the “Jugendverein” (Christian Endeavor) and the German school were discontinued. From the mid-1940s to about 1959 Mayfair was a small congregation served occasionally by visiting pastors but mostly by lay sermon readers. When the Mullingar Mennonite Brethren church closed in the late 1940s their minister, Ben Derksen, served Mayfair until he also moved away. The Conference of Mennonites in Canada established a mission church at Bluebird, Saskatchewan (Bluebird School), an area northeast of Mayfair and Frank Enns from Bluebird served the Mayfair church starting in the 1950s. In 1963 the Mission Board offered to share their minister who pastored at Bluebird and Belbutte, Saskatchewan. Thus Jacob Reimer also served Mayfair. Reimer's messages were entirely in the English language. Formerly, only children's Sunday School was conducted in English; all other church services and business meetings were in German. This language change encouraged non-Mennonites from other backgrounds to worship at Mayfair, encouraging it to become quite ecumenical. By 1975, when the Jake Reimer left Mayfair, it had effectively become a community church since it was the only Protestant church within a 30 km radius. Mayfair was then frequently served by lay members of the Hoffnungfelder churches. Don Unger began serving the three Hoffnungsfelder congregations as a summer pastor in 1982, was ordained at Glenbush on 30 October 1983 and served from August 1983 to 2011 while taking leaves for April 1990 to July 1994 and a year in 2001-02 for mission work in Africa. His wife, Naomi Unger, began to serve as Lay Pastor in 1998; they both retired in 2011. In 2003 Mayfair had a membership of only three, but since it served as the community church Sunday attendance often numbered 15 to 20 participants.

The Hoffnungsfelder church at Mayfair closed unofficially in 2017.