From GAMEO
Revision as of 21:43, 4 January 2021 by RichardThiessen (talk | contribs)
(diff) ← Older revision | Latest revision (diff) | Newer revision → (diff)
Jump to navigation Jump to search
A checked version of this page, approved on 4 January 2021, was based on this revision. 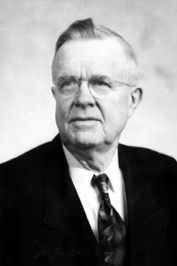 Hiebert taught in rural schools in Kansas for five years and was pastor of Mennonite Brethren congregations in Dallas and Portland, Oregon in 1907 and 1908. Together with H. W. Lohrenz, Peter helped establish Tabor College in Hillsboro, Kansas, 1908. Here he served as teacher, dean, vice president, and president (1932-1934) for 25 years (he taught at Sterling College in 1931-1932). Then he taught at Sterling College for 13 additional years. He was a strong advocate for Christian liberal arts education.

P. C. Hiebert helped organize the Mennonite Central Committee (MCC) and served as its chairman for the first 33 years. He first met Orie Miller at an organizational meeting in the Prairie Street Mennonite Church, Elkhart, Indiana in 1920. Here a friendship and partnership developed that enriched the lives of thousands with whom they worked through the MCC around the world. P. C's work with the MCC began with a trip to South Russia in 1922 to aid Mennonites in the colonies suffering from famine, drought, and revolution. Between the wars Hiebert worked hard to keep the MCC alive through projects related to colonization, refugees, and relief. He was the first chairman of the MCC Peace Committee (Peace Section) and helped develop, in collaboration with the Church of the Brethren and Friends, "A Plan for Action for the Mennonites in Case of War." He helped organize the National Service Board for Religious Objectors (NSBRO), an agency through which the historic peace churches could together deal with Selective Service (US). This, in turn, led to the establishment of the Civilian Public Service Camps.

Hiebert's leadership touched the lives of people around the world through service "in the name of Christ." His life was deeply colored by the Anabaptist vision of Christian discipleship. His witness was focused by two crosses—the cross of Christ's atonement and the disciple's cross. These two crosses gave unity and purpose to his life.

Warkentin, A. and Melvin Gingerich, compilers. Who's Who Among the Mennonites. North Newton, KS: Bethel College, 1943: 110.