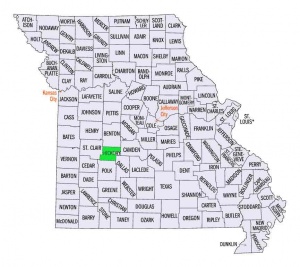 In 1867 the Herald of Truth reported that there were 15 Mennonite families in Hickory County but that the community did not have a minister. In December 1870 when Preacher Joseph Stucky from Illinois visited the congregation Carl F. Kuntz was ordained bishop of the church in Hickory County. After worshiping in homes for many years, the congregation built a church about 4.5 miles (7.2 kilometers) southwest of Wheatland on land donated by Christian Gerber and therefore known as Gerber's Church, although Gerber had by that time become affiliated with the General Conference Mennonite group in the county.

The Egli Amish (Defenseless Mennonites) also became established in the county, winning some of the Amish Mennonites to their fellowship. Their meetinghouse was built earlier than the Gerber Church and was located approximately one mile (1.6 kilometers) north of the place where the Gerber Church was later built. The two groups were settled in the Wheatland prairie, with their farms between points east of Elkton on the south and Quincy to the north.

The General Conference Mennonites had a small congregation in the south part of the county, known as the Elkton Church. The few families had services in homes and schoolhouses and for a time were served by Minister Peter S. Lehman, formerly from Berne, Indiana. After he left the county, ministers were supplied by the church in Morgan County.

When the settlement was established, land was in open range and comparatively cheap. Because both the northern and southern armies swept through the county in the Civil War days, the Amish settlers were impoverished. The ending of the open range and the scarcity of good soil beyond the limits of the Wheatland prairie brought economic hardships to the settlement that resulted in its extinction. Only a few families remained in the county beyond the first decade of the 20th century. At least as early as 1882 Mennonite families began to leave the settlement for Johnson County, Missouri. The H. P. Krehbiel census of 1911 lists only one Mennonite church in the county, the Defenseless Church of nine members with Christian Zehr of Quincy serving as minister.