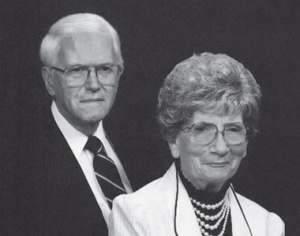 In his early years, Orlando grew up with his parents and two younger siblings near Hillsboro. He was baptized on 9 September 1935 at the Ebenfeld Mennonite Brethren Church in Hillsboro. After finishing his basic education, Orlando studied English and Journalism at Tabor College, Friends University, and the University of Colorado. He taught at Tabor College for some time before being hired as an editor and writer for the Hillsboro Journal, a local weekly paper. After six years in this field, he was ordained as a pastor at the First Mennonite Brethren Church in Wichita, Kansas. He served in this position for seven years before returning to the field of publishing.

In 1954, Harms accepted the position of general manager of the Mennonite Brethren Publishing House in Hillsboro. The business was almost bankrupt, but Orlando succeeded in gaining support for the publishing company’s two main periodicals, the Christian Leader and Zionsbote. In addition to editing these publications, he assisted with two adult Sunday School curriculum materials, the Adult Quarterly and Lektionsheft. He also worked with conference yearbooks, a hymnal, and the devotional publication, Rejoice, as well as managing the operations of a bookstore and writing on social and church issues.

Meanwhile, Erna and Orlando were busy in the church and the community. Erna worked as a primary school teacher and as a volunteer in a local shop. She also enjoyed singing and participated in local musical performances. Besides his work, Orlando was also involved in many leadership positions in the Mennonite Brethren Church. He worked in the General, U.S., and Southern District Conferences, helping out in a variety of capacities. He also spent time researching and writing about various topics, with an emphasis on church history.

In 1976, Harms retired from his position as editor of the Christian Leader, and two years later, he retired from his job as manager of the Mennonite Brethren Publishing House. He continued to write on a variety of church-related topics during his retirement, also spending time traveling and teaching. He died in Hillsboro in 1993 at the age of 80. Erna died in 2004.

Orlando Harms had a profound influence on the worlds of Mennonite publishing and theological reflection. Through his work as an editor and writer, he helped people connect their faith with the various issues they encountered, influencing the direction of the Mennonite Brethren Church in the United States.