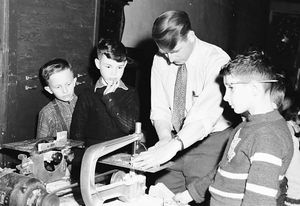 Lyle Hallman working with three boys at the Goodwill Hall in Kitchener, Ontario, during the 1950s. Mennonite Archives of Ontario photo DH-580

Lyle Shantz Hallman: businessman, entrepreneur and philanthropist, was born on 14 January 1922 in Waterloo County, Ontario, Canada, the son of Anson Hallman (21 September 1887-21 January 1983) and Esther Shantz (3 June 1891-19 December 1961). Lyle was the middle of three children. Ward (older) and Jean (younger) were his siblings. His first marriage was to Dorothy Groff (b. 3 December 1923) on 27 June 1947. They became parents of Peter, Susan, James and Tom. After their divorce in 1980, Lyle married Wendy Guittard (b. 1949) on 22 January 1982. On the morning of 26 October 2003 on his way to church, Lyle was killed in an automobile accident. The funeral was held at Waterloo Mennonite Brethren Church. The interment was at First Mennonite Church in Kitchener.

Lyle attended various elementary and high schools in Waterloo County, graduating from Kitchener Collegiate Institute in 1939. His first job was delivering newspapers. He also helped his father build the Golden Rule Bookstore in Kitchener. Lyle joined the Royal Canadian Air Force in 1942. Three years later he received his discharge in what he called “the happiest day of my life.”

In 1945, with $500, and assistance from his parents, he started Hallman Construction. From then on Lyle’s primary focus was on real estate. Lyle started the business by excavating a basement with a team of horses and a scraper. He initially experienced many lean years. But as the business grew Lyle gained a reputation for well-built houses at affordable prices. In 1946 he started a local Home Builders Association. Starting in 1953 he became the most prolific builder and manager of apartment complexes in the area. By 1988 he was annually developing about 100 house lots and almost 300 apartment suites in Kitchener, Waterloo, Cambridge, and the surrounding towns. At his death, the Hallman Group of Companies owned and managed 4,000 apartment units.

In the 1950s, Lyle spent his Saturday afternoons directing programs for boys at Goodwill Christian Hall in Kitchener. He was a member of the Board of Directors of Conrad Grebel College (1964-1968). He also later served as a governor of the K-W Hospital Foundation.

From 1980-1985 Lyle was Treasurer of the National Home Builders Association. He became the National Chairman of the Housing and Urban Association of Canada. His advice about property and apartment management was sought locally and provincially.

Lyle felt that the profits from his business should be used to make more money--and to give it away. He became best known for his philanthropic contributions to his home community. Among the recipients of millions of dollars were the Kitchener and Waterloo Community Foundation, the Cambridge and North Dumfries Community Foundation, the University of Waterloo Library; the Lyle S. Hallman Institute for Health Promotion at the same university; the Lyle S. Hallman Chair in Child and Family Welfare at Wilfrid Laurier University; the Pet Trust and animal MRI project at the University of Guelph; the Grand River Hospital Foundation, St. Mary’s Hospital; the Waterloo Recreation Complex; Fairview Mennonite Home; the Strong Start Reading Program in Waterloo Region Schools; the Waterloo Region Children’s Museum; and the Lyle S. Hallman Swimming Pool--a project for the residents of the community that Hallman Construction built.

A business friend said of Lyle: “He wanted to leave a lasting legacy and show an example to other wealthy individuals. Lyle encouraged his friends and colleagues to follow his model of providing seed money for a trust, and then urging others to get involved.”

Lyle Hallman was invested into the Order of Canada in 2001. He received an Honorary Doctor of Laws degree from the University of Waterloo (2001), and was awarded the Canada 125 Medal (1992). He was installed as a member of the Region of Waterloo Hall of Fame. Lyle also received many other awards.

Robert L Warren, Chair of the Grand River Hospital, in remembering Lyle, said, “Lyle Hallman was known throughout our community as a selfless philanthropist. Lyle was a leader of great vision and compassion. He will be truly missed.”