"Habáner" was originally a nickname for the Hutterites in Slovakia, used by the Slovakian peasants. Later Habáner was the general name for those Hutterites who after about 1760 turned Catholic and as such were permitted to continue to live in their existing Bruderhofs on a semi-community or cooperative principle. These Habáners were still living in a few villages of Western Slovakia in the 1950s; in 1925 the older people were still speaking German. By the mid-20th century they had become almost completely Slavicized, and their old traditions, customs, and skills were nearly gone, although remnants of their former community organization still existed. The name "Habáner" has been differently explained: as deriving from "Haben," a section of Velky-Levary (the former Gross-Schützen), or from "Haushaben" (another term for Bruderhof), which the neighbors abbreviated into Haben. The latter interpretation would correspond to the usage of neighbors in America who call the Hutterites "the colony people."

The violent conversion of the Brethren by a strengthened absolutistic government under Empress Maria Theresa (1740-1780) and the greater Jesuit missionary activity then permitted in Hungary is graphically described in the Hutterite Klein-Geschichtsbuch (230-239). Around 1700 their former community of goods was widely abandoned, yet the Bruderhof organization still remained under a central leadership, with communal bakeshop, blacksmith shop, slaughterhouse, school, and common pastures and ponds. After 1726 infants were generally, although not always, baptized. The last active Vorsteher of the brotherhood was one Zacharias Walter, 1746-1761, but eventually he could no longer stand the brutalities of his persecutors, and turned Catholic. The next Vorsteher, Heinrich Müller, died steadfast in a monastery 1762. After 1757-1758 all Anabaptist books were confiscated by Jesuits and later sent to Bratislava, Esztergom, and even Budapest. In 1769 the entire population of the Bruderhofs in Sobotiste, Veľké Leváre, St. Johann, and Trenchin were compelled to attend Catholic services. The methods used were rather brutal: children were taken away from their parents and put into Catholic orphanages, and the men were dragged into monasteries until they accepted the Catholic faith. In the 1780s (time of Joseph II) a second wave of book confiscation set in. Recent reports, however, show that nevertheless a good number of their precious handwritten books were kept and hidden. In the 1890s, when an old house was torn down, books were found behind the plaster of the walls. It was not until 1863 that all fields were completely parceled out into individual lots. But even in 1925 they had something like a community chest and a few other cooperative activities on their Hofs.

Many Brethren tried to emigrate to the Ukraine (Little Russia), where those Brethren who had lived in Transylvania had found a new refuge. But this was more difficult than anticipated, the authorities being extremely vigilant and permitting no emigration whatsoever. Strangely enough, Emperor Joseph II (1780-1790), generally known as an "enlightened" ruler, who issued the famous Toleration Edict of 1781, and who in 1782 had a long conversation with a group of petitioning Brethren (Klein-Geschichtsbuch, 364f.), still refused to give the Brethren freedom of worship, and demanded that they stay in their new Catholic faith. During the 1780s the Brethren in the Ukraine five times sent missionary teams to Slovakia to induce emigration, but in spite of the desire of nearly all Habáners to return to their former faith, the results were rather poor. The Klein Geschichtsbuch (p. 374) lists a total of eleven families with 56 souls who actually managed to reach the Ukrainian Bruderhofs. Among them was also one Jacob Walter, of probably the oldest Hutterite family in existence (since the 1590s). After the promulgation of the Toleration Edict in 1781, many Habáners declared themselves no longer willing to go to a Catholic church, but their resistance soon broke down. In 1793 another team arrived from Russia, but it failed completely in its purpose. One hundred years later the Brethren now in America again invited the late descendants of these Brethren in Slovakia to come over and begin anew a life in the brotherhood. One Ignatz Pullman came in 1892, bringing a number of rare codices and books along (no longer of value to him) but soon left again. Today the Habáners have almost completely lost knowledge of their own earlier history as Hutterites. Occasional visitors (Dutch Mennonites in 1910, Hutterites from America in 1936, also a few interested scholars like Beck and others) told them their own history, yet hardly awakened any reaction to it. 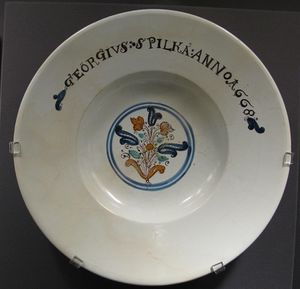 In the 1950s there existed only two such Hofs in Slovakia, namely, in Sobotište and in Veľké Leváre. They represented closed settlements with handsome whitewashed, one-story houses (built of sun-baked clay brick), arranged in a square around a central courtyard, very clean and so solidly built that most of these houses still stand as they were built soon after 1621. Remarkable were  their high thatched  roofs which were almost fireproof because the straw on the inside of the roof was worked through and covered with clay so that no straw is visible at all (a good protection also against heat and cold, and even dirt). At the ground level were found all those rooms which once served brotherhood activities such as worship, eating, cooking, children's and sick rooms. The floor of this level was of stamped clay covered with yellow sand—a practice which the Brethren also continued even in their American houses until the first half of the 20th century. The attics had two stories with the bedrooms, called Oertl or Stuben. Besides the square, around the courtyard there were other buildings such as the mill, the forge, butcher shops, and in Sobotište also a remarkable clock tower.

Famous were the crafts of the Habáners. Still in the 1950s one house in Veľké Leváre shows the tiled sign of a potter's "firm," J. H. 1781, which stands for Joseph Hörndl, the Krügelmacher (Beck,  Die Geschichts-Bücher der Wiedertäufer in Oesterreich-Ungarn, 620, Klein-Geschichtsbuch, 355), a man known for his stubborn allegiance to the old faith, who wrote to the Ukraine for help. Their ceramics, called "Habaner-Fayence," were of the highest quality and still are the pride of museums (see Ceramics). 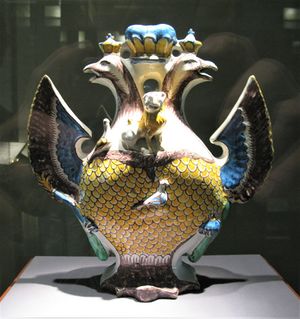 An ornamental bottle in the form of a Russian double eagle believed to have been made by Hutterites in their Bruderhof in the Russian Village of Vyshenka sometime in the years 1770-1802. This piece demonstrates that Hutterites carried their pottery making craft with them even to settlement in Russia. The bottle would have been made by commission for a Russian nobleman for it is much too elaborate for the simple living of Hutterites. This piece is in the Walter C. Koerner Collection. Photo: Courtesy of Victor Wiebe.

Today this craft is no longer practiced. Their other outstanding craft was the making of fine steel knives; it, too, is dead today. Only minor crafts such as shoemaking, tanning, etc., have survived and found a good market both in Slovakia, and before 1918 in Lower Austria.

The most remarkable fact is that in spite of re-Catholization and de-Germanization, a skeleton organization still survived to the mid-20th century. In 1936, when two Hutterite elders from Canada visited these places, they were warmly received, shown around, and even some faint memories of old stories came to the surface. In fact, in one chest some old books were still discovered, and a few of them were even taken to America.

In the academic art world the term "Haban" has been used since the late nineteenth century for a certain form of faience pottery as: "Haban Pottery"; or "Haban Faience." This pottery was made in Moravia, Hungary, Western Slovakia and Transylvania since the sixteenth century and it was the Hutterites or by those Hutterites who were later forced into Catholicism who made this form of pottery. Today these pieces of pottery because of their superior craftsmanship are highly sought after and most museums in central Europe hold collections and label them as Haban. In North America the largest collection is the Walter C. Koerner Collection in the Museum of Anthropology at the University of British Columbia, Vancouver, Canada. Because of this interest by the art world considerable research is occurring in the old locations of Hutterite Bruderhofs and into all of their crafts not only of pottery but also into metal working, and manufacturing of household articles.

Horvath, J. Eugene, and Maria H. Krisztinkovich. A History of Haban Ceramics: A Private View. Vancouver, B. C. [Published by the authors]. 2005.

Peschel-Wach, Cladia. "The art of the Old Masters- Tableware of the Anabaptists and Haban Faience From Western Slovakia in the Collections of the Austrian Museum of Folk Life and Folk art in Vienna." in: Act Ethnographica Hungarica. vol.60, no.2, 2015: 395-415.

Concerning book confiscation see Friedmann, Archiv für Reformationsgeschichte (1929): 166-168. An extensive description in the Slovakian language is presented by Frantisek Kraus, Nové Prispevky k Dejinam Habanov na Slovenska (Bratislava, 1937), with very fine illustrations. The description of the trip of the two Hutterite elders (Michael Waldner and David Hofer) to Slovakia in 1936 exists only as a typescript, extant in several Canadian Bruderhofs.