GAMEO (pronounced găm’-e-o) emerged from two earlier projects. The first was the five-volume Mennonite Encyclopedia that was published from 1955 to 1959, with a supplementary fifth volume in 1990. The second project related to the three-volume Mennonites in Canada history series sponsored by the Mennonite Historical Society of Canada (MHSC) from 1968 to 1996.

In the mid-1980s, Marlene Epp, later a Professor of History and Peace and Conflict Studies at Conrad Grebel University College in Waterloo, Ontario, Canada, was a research associate for her father. Frank H. Epp, then a professor at Conrad Grebel, was preparing to write a third volume in the Mennonites in Canada book series.

The project was suspended when Frank Epp died in early 1986 while awaiting a heart transplant. However Marlene Epp continued as research associate for MHSC, and developed multiple informational databases on Canadian Mennonites -- congregations, institutions, conferences, businesses, periodicals and biographies. By far the largest of these was the congregational database that included basic information on 1200 Canadian Mennonite congregations, some of which no longer existed.

In 1987 the MHSC created a database committee to determine how best to utilize these databases. The committee members were archivists at three Mennonite historical centers in Canada (Bert Friesen, chair; Sam Steiner, Lawrence Klippenstein, Ken Reddig) plus Ted Regehr (the eventual author of the third volume of Mennonites in Canada) and Marlene Epp. Already in early 1988 Marlene Epp suggested the possibility of a Canadian Mennonite Encyclopedia.

Since the World Wide Web was not yet available, discussion within the committee focused primarily on how to make these databases available at the various Mennonite historical research centers in Canada.

Finally in 1995 the MHSC authorized the database committee to study the feasibility of loading the congregational database onto the still-new World Wide Web. In 1996, with the assistance of the University of Waterloo Library, Sam Steiner, then the librarian-archivist at Conrad Grebel College, loaded a prototype Canadian Mennonite Encyclopedia onto a MHSC website hosted by the university library. At the end of 1996 it contained 550 brief congregational articles.

In March 1998, MHSC received permission from Herald Press (Scottdale, Pennsylvania) and the Institute of Mennonite Studies (Elkhart, Indiana) to digitize the print Mennonite Encyclopedia. The project also received a Canadian government grant to facilitate the work. Initially Sam Steiner selected Canadian-related articles from the print encyclopedia for copying and adding to the website.

In 2004 the encyclopedia's editorial board (still composed of representatives from various Canadian Mennonite archives) concluded the nascent encyclopedia should expand to become worldwide in scope. 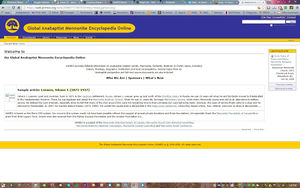 In 2005 the name of the website was changed to Global Anabaptist Mennonite Encyclopedia Online. Volunteers from Mennonite archives throughout North America proofread scanned sections of the print encyclopedia. The articles were modified to account for timeframe and to adjust obsolete language. The articles were then loaded on to the website, hosted after 1998 on Conrad Grebel College's own server. By the end of 2005 there were 2,700 articles on GAMEO. In 2008 web hosting moved from the College to Peaceworks Computer Consulting (now Peaceworks Technology Solutions).

In 2005 two partners -- the Mennonite Brethren Historical Commission and the Mennonite Church USA Historical Committee – became partners in the project. Mennonite Central Committee joined in early 2006, Mennonite World Conference joined in January 2007 and the Institute for the Study of Global Anabaptism (Goshen, Indiana) joined in October 2011. Various regional North American editorial groups solicit articles which are reviewed and submitted for publication. An international group of consulting editors was also appointed.

In 2012 GAMEO shifted its financial accountability from the Mennonite Historical Society of Canada to Mennonite World Conference. A management board composed of representatives from each partner provided oversight to GAMEO.

The financial requirements for GAMEO have been modest as all work has been provided by volunteers. Fundraising has been done for upgrading the software platform (in 2015 GAMEO was based on a Mediawiki system) and special projects. A DVD version of GAMEO was released in 2011 for use by groups that did not use the Internet. Operational expenses in 2015 were $4,500, primarily related to Management Board meeting expenses and website hosting.

Global Anabaptist Mennonite Encyclopedia Online Management Board minutes. In possession of the author.