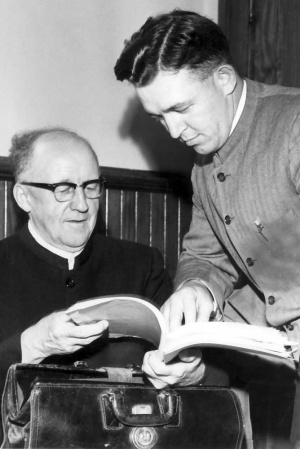 At the age of six, Newton Gingrich's family moved to the Elmira area of Ontario where his father worked in feed mill. In difficult financial times Newton left school at age 13 to become a farm laborer. He was baptized in the Elmira Mennonite Church at the age of 14. He was able later to study at the Ontario Mennonite Bible School (1946-1948) and in the Eastern Mennonite College (EMC) junior college Bible program (1948-1950). Newton and Mary met at the Bible School, and continued their relationship at EMC where both studied in 1948/49.

In late 1948, Oliver Snider, the minister at Elmira Mennonite encouraged the new Bethel Mennonite Church near Elora, Ontario, to consider Newton for its pastoral leadership. Newton consented to serve if the congregation would allow him to complete his junior college program. They agreed to do so. On 19 June 1949 he was ordained as pastor of the congregation--one week after his marriage. After their return from studies in 1950, he supplemented his $900 annual salary with carpentry work and operation of a small farm. In 1954 the congregation agreed to provide housing for the couple. Among the practices he initiated at Bethel were formation of a church council and the printing of weekly bulletins.

Gingrich served three congregations during his years of ministry--Bethel Mennonite (1949-1960), Wideman Mennonite (1960-1965) and East Zorra Mennonite (1966-1979). He completed his service at East Zorra in preparation for a year of study at seminary one month before his death. He brought great energy and organization skills to his pastoral work; one congregational historian wrote, "Frequently he came to meetings with issues thought through and conclusions reached. Some ... wanted more discussion and more time to reflect." His "strong leadership" at East Zorra would not prevent the withdrawal in 1966 of a number of members to form the Maple Grove congregation. He was considered a capable speaker who enjoyed preaching on biblical doctrines and doing studies on books of the Bible.

His organizational gifts were soon utilized beyond the local congregation and in the area conference, the denomination and in inter-Mennonite organizations. Already in 1951 he began to serve on the board of the Ontario Mennonite Bible School (OMBS), which he continued to 1962. He joined the faculty in 1958 and became its last principal in 1966 (it closed in 1969). In 1954 he became a member of the Mennonite Conference of Ontario Executive Committee; in 1959 he became its assistant moderator and in 1961 its moderator, a position he held until 1970--four years after he began to pastor a congregation that was not a member of his conference, but rather was in the Western Ontario Mennonite Conference! He became chairperson of the Mission Board in the Western Ontario Mennonite Conference in 1970 and continued in that role until his death. He became moderator-elect of the newly restructured Mennonite Church in 1971, and served as its moderator from 1973-1975. He continued on its General Board until 1977, and at his death was serving as Coordinator of Local Arrangements for the Mennonite Church Assembly to be held in Waterloo, Ontario in August 1979. He was part-time executive secretary of the Mennonite Church's Region I (Canada).

In 1963 Gingrich served on a committee that drafted the first constitution for Mennonite Central Committee (Canada)(MCC Canada). He was Vice-Chair of its first executive committee, and later served as the chair of MCC Canada from 1972-1978. Beginning in 1968 he served as an MCC Canada representative on the Mennonite Central Committee [International] (MCC) executive committee. He became chair of MCC in 1977 and was serving in that role at the time of his death. He was described as a "bridge" between Mennonites in the United States and Canada and represented the concerns of both countries throughout his years of leadership. In 1978 Gingrich began to serve as a member-at-large on the Mennonite World Conference executive committee.

Newton Gingrich died suddenly of a heart attack at a family retreat property near Drumbo, Ontario on 1 August 1979. His friend, Vernon Leis, described him as an innovator of new projects, a reconciler with divided groups, an interpreter of the faith and a facilitator who could help a group be productive. However he was also "a leader who was prepared to give and give but I wonder if he robbed himself and others to give to institutions which were too ready to take and take." Newton and Mary Gingrich are buried at the East Zorra Mennonite Church cemetery.

Newton L. Gingrich (13 October 1925-1 August 1979) was an active and influential leader in Mennonite Church (MC) congregational, conference, and institutional work. Gingrich was born in the Drake-Guernsey area of Saskatchewan. He pastored three congregations in Ontario during his active ministry. He served on numerous conference, denominational, and inter-Mennonite committees and boards. He was chairman of Mennonite Central Committee (MCC), 1977-79, and a member of its executive committee, 1968-79; chairman of MCC Canada, 1972-78; moderator of the Mennonite Church (MC), 1973-75, and half-time executive secretary for Mennonite Church, Region I, until his death. Gingrich served on the general council and the executive council of Mennonite World Conference. He was a strong advocate of inter-Mennonite cooperation and one of the early supporters for the integration of various conferences in Ontario. He taught at the Ontario Mennonite Bible School and Institute, was its principal from 1966-69, and wrote Mission Completed, which detailed the history of the school. His formal training included work at Eastern Mennonite College, Harrisonburg, VA. He was married to Mary Sommers and had 1 daughter and 3 sons. He died in Kitchener and was buried in the cemetery at the East Zorra Mennonite Church.

Original entry published in 1990 from The Mennonite Encyclopedia, Vol. 5, p. 342 by Ralph A. Lebold.