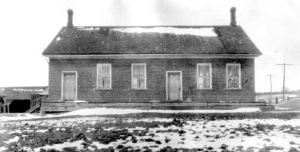 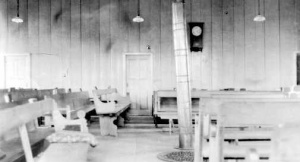 Interior of the 1857 building.
Photo by Edwin Byer. 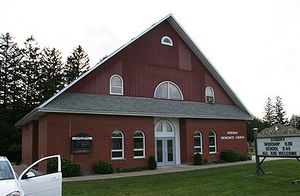 The Wideman Mennonite congregation in Markham, Ontario is named after its first minister, Henry Wideman (d. 1810), who emigrated from Bucks County, Pennsylvania in 1803. The first meetinghouse was located across from his homestead.

The language of worship is English; the transition from German occurred in the 1880s. The congregation began services in 1803, and formally organized in 1816. The first building was occupied in 1817 with subsequent building programs in 1857 and 1928. Henry Wideman is considered the founding leader of the group. The congregation originated through immigration from Pennsylvania.

Sunday school began about 1876 but was closed in the 1880s. Wideman's was the largest of the early Mennonite churches in the Markham area. A substantial portion of the congregation followed its bishop, Christian Reesor, into the Old Order Mennonite movement. The Mennonite Brethren in Christ also attracted a number of members.

Sunday school was re-established and English was used as the language for worship in the 1890s, making Wideman more accessible to the community.

The late 20th century brought massive changes to the community served by the congregation, as the Greater Toronto Area experienced unrelenting growth. Traditionally, most families in the church were farmers, and many moved away to other communities in Ontario where land and housing were more affordable. A smaller and more diverse congregation remained. Although some members could still trace their roots back to the original pioneers in the area, many came from other backgrounds.

Records at Mennonite Archives of Ontario.