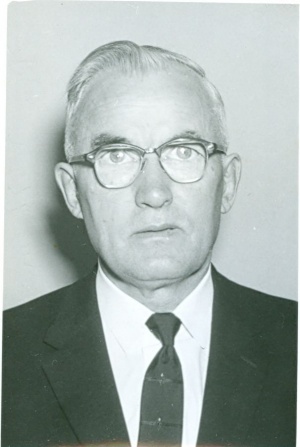 Wilhelm Falk: minister and missionary; born on 30 April 1904 in Steinfeld, Schlachtin Mennonite Settlement, South Russia, to Wilhelm and Anna (Warkentin) Falk.  He was the fifth of eight children and the eldest son in his family. On 24 February 1924, Wilhelm married Helene Guenther, daughter of Isaak and Anganetha (Klassen) Guenther. Wilhelm and Helene had two boys and two girls, all of whom survived childhood. Wilhelm died on 14 May 1969 in Winnipeg, Manitoba.

Wilhelm Falk grew up with his family in Steinfeld to parents who had come from Kronsweide, Chortitza Mennonite Settlement. He met and married Helen Guenther from Eichenfeld, Yazykovo Mennonite Settlement, in 1924. Very soon after their marriage, the couple immigrated to Canada, settling in Manitoba. After a conversion experience in 1927 in which he fully committed himself to God, Wilhelm joined a small group to further his knowledge of his faith through Bible study and discussion. When other members of the group encouraged him to become a pastor, he decided to follow their advice. He preached his first sermon at his home church before enrolling in a theological program at the Winnipeg Bible Institute (now Providence College).

When his studies were finished, Wilhelm Falk went to work for the Mennonite Brethren church as a city missionary in Winnipeg, Manitoba, continuing in this work for almost 17 years. Meanwhile, he and Helen began to establish a family, with their first child, a daughter, being born in 1925 and their second, a son, in 1933 in Marquette, Manitoba. Their younger two children, another daughter and a son, were born in 1942 and 1946, both in Winnipeg.

In 1953, Wilhelm was called to work as the pastor of the North Kildonan Mennonite Brethren Church in Winnipeg, where he stayed for 12 years. His next call was to serve as pastor of the Morden Mennonite Brethren Church in southern Manitoba. Only two years later, in the fall of 1967, he developed cancer and his health began to decline gradually, forcing him to resign. During the two years of illness that followed, he expressed his thankfulness for his many years of good health and prayed for God’s name to be praised through his illness. He died of his illness at home on 14 May 1969.

Wilhelm Falk was a dedicated missionary and minister who committed his life to serving his church and the community around him in whatever ways he could. Through his work in the city mission and the churches in Winnipeg and Morden, he helped change the lives of many people and was an example of dedication for his family and the people around him to follow.