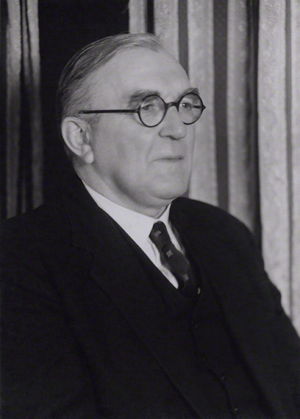 Alfred Ewert: Rhodes Scholar, Medieval French expert and author, founder and editor of French Studies, Curator of the Bodleian Library, Chair of Romance Languages and Fellow of Trinity College, Oxford; born 14 July 1891 in Halstead, Kansas, USA, the third of five children of Heinrich H. Ewert (1855-1934) and Elizabeth (Baer) Ewert (1858-1925). In 1920 Alfred married Irene Agnes Oldershaw (1891-1959) and they had two daughters, Elizabeth and Margaret. He died in Oxford, England on 22 October 1969.

Alfred Ewert left the Mennonite Church after World War I, but his background and life up to that point is an example of the impact of the assimilative forces on educated Mennonites of Manitoba in the first decades of the 20th century. Born in Halstead, Kansas, Alfred came to Gretna, Manitoba as a young child in 1891 when his father was recruited to become the school inspector of Mennonite schools in Manitoba, and principal of the newly established Normal School for Mennonites (later known as the Mennonite Educational Institute and then the Mennonite Collegiate Institute). He was educated in Gretna schools and graduated from the Mennonite Collegiate Institute. Thereafter he worked for a number of years in the printing trade while studying music and Latin. In 1909 he enrolled in Wesley College, then affiliated with the University of Manitoba, and graduated in 1912 with First Class Honours.

Following graduation, Alfred was awarded a Rhodes Scholarship and went to study at St. John’s College, Oxford. This decision was the turning point in his life. In 1914, he took a First Class in German, and during these years in Oxford he also excelled at hockey, lacrosse, tennis, and football. When the World War I broke out he joined the Canadian Over-Seas Expeditionary Force (medical services) and went to France with the first contingent in 1915. In 1917, he was promoted to Lieutenant of the Canadian Infantry Battalion of the Western Ontario Regiment. On his enlistment form he still listed his religion as “Mennonite,” but his actions and decisions during these years would eventually alienate him from both his father and the Mennonite Church. For his father, H. H. Ewert, the cultural crisis brought on by the war and school legislation in Manitoba changed his views on accommodation to Canadian society and the use of English, and he came to believe that he had made a mistake in sending his children to English language universities, and that if he had it to do over again he would send none of his sons to university. He regarded his son Alfred as a noble-minded young man, but was convinced that Oxford and English society during the war had alienated him from his Mennonite faith. For his part, Alfred would break completely with his father, both because he disagreed that German had to be kept alive in order to preserve the Mennonite faith, and because he believed that Canadian citizens and British subjects owed a service to the state.

After the war in 1919, Alfred returned to Oxford and resumed his studies, this time in French and Spanish eventually becoming a University Lecturer in French at Oxford in 1921. In 1930 he was elected Chair of Romance Languages and was admitted to a Professorial Fellowship at Trinity College. During his long and distinguished career at Oxford (he would retire in 1958) he was best known for his promotion of French and Medieval studies, and the publication of medieval French texts and a history and historical grammar of the French language.

At the onset of World War II, Ewert had another crisis of sorts. Wishing to take part in national service again, he found, to his dismay, that he was not a Canadian citizen. Somehow, in the move to Canada in 1891, he had not been naturalized and, despite having served Canada for four years during the World War I, he was now denied that right. He was terrifically upset and felt that his life had been “one long lie”. He and his sister, Elma, both wrote Howard Winkler, the Member of Parliament for Lisgar, asking him to intervene to vindicate him and gain Canadian citizenship. Through Winkler’s intercession, Alfred Ewert became a Canadian citizen in 1940.

Despite his long career in Oxford, Ewert returned to Manitoba a number of times (1938, 1959, 1964, 1967) to visit old school chums and renew his acquaintance with the places of his youth. In 1967 he delivered the Hurd Memorial Lecture at Brandon University (Brandon, Manitoba) on the “The Indebtedness of English to French,” in which he promoted a greater measure of English-French bilingualism in Canada. That same summer he visited the Mennonite Collegiate Institute and spent some time wandering through the halls of the school, but left without saying much except to comment that at least the library had the Oxford English Dictionary.