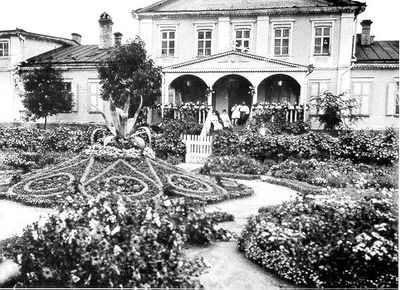 Estate Owners (Gutsbesitzer) were a landed elite who formed a distinct and privileged social group among Russian Mennonites. Although small in number they played an important part in the development of Mennonite life in Russia. Many of the really wealthy landowners by 1914 were descended from a small group of entrepreneurs who had acquired land before 1860, usually the estates of impoverished Russian gentry. Land at this period was cheap and large acreages were needed to pasture the large flocks of sheep these entrepreneurs had acquired. Pastoral farming gave way to arable farming and by the end of the 19th century cultivation was extensive, using modern machinery and peasant labor. In southern Russia cereal production provided estate owners with extremely large incomes.

Estate owners, particularly the large landowners, formed a separate social group. Considerable intermarriage occurred among the children of estate owners and marriage alliances were also made with the families of other wealthy Mennonites, particularly industrialists. Many industrialists and rich millers also purchased estates after 1860. Ownership of large estates was restricted to a few leading families whose life-style was very different from that of other Mennonite settlers. They lived in large houses, employed many servants and traveled widely. Their children were often well educated and associated with the Russian and Mennonite intelligentsia. They were more integrated into Russian society than most Mennonites and were involved in local and national affairs. Two estate owners, Hermann A. Bergmann and Peter P. Schroeder, were members of the Imperial Duma (parliament).

Although a distinct social group, members of estate-owning families maintained close ties with the wider Mennonite community. Through payment of taxes and generous voluntary donations they supported major Mennonite social and welfare institutions before 1914 including the Forsteidienst (forestry service), schools, hospitals, and various religious concerns.

In the 1917 Russian Revolution and subsequent time of anarchy and civil war they lost most of their land and many were killed. Others fled to the Mennonite settlements and many later emigrated, mostly to Canada.

Urry, James. "Through the Eye of a Needle: Wealth and the Mennonite Experience in Imperial Russia." Journal of Mennonite Studies (1985): 7-35.