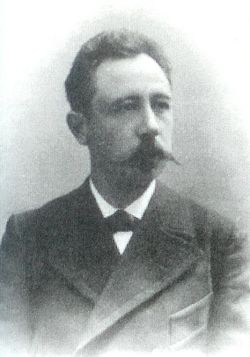 Peter Peter Schroeder: politician and estate owner; born on 2 December 1866 in Melitopol, South Russia, to Peter Heinrich Schroeder and Maria (Klassen) Schroeder. He was the third child born to his father but the eldest of eight children from his father’s second marriage. He never married, but he lived with his sister Margarethe for many years. His education was in commerce and science, but he made his living as an estate owner and manager. He died in Chortitza on 6 June 1942 at the age of 75.

As a child, Peter lived with his family in Tashchenak, where his parents owned an estate. He likely received his elementary education on the estate before continuing on to secondary and probably Kommerzschule (school of commerce), possibly in Melitopol, specializing in commerce and science. His further education was in Kharkov, likely at the city’s university, in the field of commerce. He is said to have been one of the few Mennonite students to have completed his courses entirely in Russian.

Fairly early, Peter took up residence on the family's Crimean land holdings in order to take over the management and supervision of the estates and other parcels of land, most of which were in the area of Station Kurman Kimiltschi (now called Krassnogvardeskoye). Peter’s inherited land was not far from his sister Margarethe’s property, and so they lived together at Novo-Nikolsk. Their mother also lived with them until her death in 1913.

After government reforms in 1905-1906, Schroeder was one of three local representatives elected to the Duma, where he worked on committees to help shape legislation regarding religious liberty and other issues. As a result of the election, Peter traveled a great deal and spent a considerable amount of time in St. Petersburg, so that he even rented an apartment in the capital city. His sister Margarethe stayed with him to run the household, and she accompanied him on the many official functions he had to attend. There is no record of Peter having made any speeches to the assembly by the time his term ended in 1917.

In 1918, Schroeder moved to Simferopol, staying there for two or three years before moving on to Zaporizhye and then to Chortitza. He had probably disposed of his estate lands before the Communists moved in to confiscate everything, and he continued to live with his sister, even after her marriage to David Goossen in 1921. They lived a quiet life with no obvious means of support, and although many former landowners and wealthy people were targeted by the authorities, they did not seem to have trouble with the police. Peter obtained a Russian passport, issued on 11 June 1941, but he apparently did not use it. He died in Chortitza on 6 June 1942 at the age of 75.

Peter Peter Schroeder was a dedicated estate owner and government representative who used his resources and position to try to benefit his community. Despite the many troubles he experienced, he maintained his commitment to helping others and had an influence on his family and the people around him.