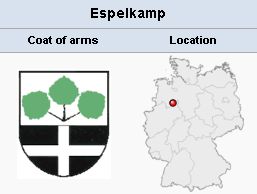 In 1953 Espelkamp-Mittwald was a new city located 60 miles (100 km) south of Bremen, Germany, built for East German refugees after World War II on the site of a former German munitions dump and poison gas factory. The area, formerly thickly wooded, covered about two square miles and contained at the close of the war about 120 barracks and warehouses of various sizes. These buildings were all earmarked for destruction by the British army of occupation, but were saved for transformation into residences and factories by the intervention of Birger Forell, a Swedish Lutheran pastor. The project was begun by the German Evangelical Hilfswerk, but later conjoint responsibility was also assumed by the state of Nordrhein-Westfalen. Late in 1948 the Mennonite Central Committee opened a semi-permanent international voluntary service camp to aid the poorer refugees in establishing their homes. Considerable religious activity grew up around this camp, which activity was later taken over by the Conservative Amish Mennonite mission board. In recognition for their services the city invited a number of German Mennonite refugees to settle there, and with MCC help about 30 families (120 souls) had become established by late 1953. Elder Albert Bartel had pastoral oversight of this new congregation. At the same date Espelkamp had a total population of 5,500, with a number of small industries such as furniture factories and a textile mill. -- PPea

Founded as a new city for German refugees from eastern areas of the former German empire, Espelkamp has become a center for Mennonites. On 21 November 1952, the Espelkamp Mennonite congregation was established. Albert Bartel, the elder, selected the text for the celebration from Psalms 133. A building in the munitions dump served as a meeting place for 71 people (53 of them were baptized members). The church increased steadily by immigration. Return emigrants from South America started coming in 1965, and resettlers (Umsiedler) from the Soviet Union in 1972. Membership in 1986 was 668, composed of about one-half resettlers, one-fourth return emigrants, and one-fourth West Prussians. Further resettlers formed a Mennonite Brethren congregation on 29 June 1974 (670 members in 1986). Following a division, a second Mennonite Brethren congregation was formed in November 1980, numbering 245 members and led by the previous elder. -- KKlaa