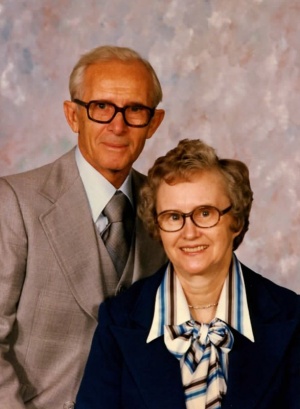 Abram Esau: missionary to the Belgian Congo (later renamed Zaire, then Congo) and pastor; born 4 October 1913 in Wohldemfürst, Kuban Mennonite Settlement, South Russia to Johann J. Esau (4 June 1871, Silberfeld, Schönfeld Mennonite Settlement, South Russia - 27 May 1947, Chilliwack, British Columbia, Canada) and Sara Wiens Esau (9 August 1876, Wohldemfürst, Kuban, South Russia - 29 February 1924, Grossfuerstental, Suvorovka Mennonite Settlement, South Russia). Within a year of his mother’s passing his father married Maria Reimer (1 January 1883, Franzthal, Molotschna Mennonite Settlement, South Russia - 2 April 1946, Yarrow, British Columbia [BC]). Abram Esau was one of 14 children: four died in infancy, three remained in the Soviet Union, one remained in Germany with a medical condition, and one child was born to the second union. On 7 June 1942 Abram married Sarah Martens (21 December 1918, Franzthal, Molotchna, South Russia - 27 March 1985, Abbotsford, BC) in the Yarrow Mennonite Brethren Church. Sarah was the daughter of Aron Martens (24 November 1877 – 6 December 1938) and Helena (Abrahams) Martens (6 August 1892 – 16 March 1958), the middle child in a family of four sons and one daughter. Abram and Sara had two sons and four daughters: Lois, Merilyn, Carol, Harold, Daniel and Esther, all born in Africa. Sarah died in 1985 and was buried in the Yarrow cemetery. On 3 April 1987 Abram married Katharina "Katie" Siemens (18 January 1923, Gortschakovo, Ufa, Russia – 16 June 2011, Abbotsford, British Columbia) who had served in India under the foreign missions program of the Mennonite Brethren Church from 1954 until her retirement in 1987. She was the daughter of Henry H. Siemens and Justina Friesen. Abram Esau passed away on 24 March 2011 in Abbotsford, BC and was buried on 2 April 2011 in the Yarrow cemetery.

While Abram was still a boy, the Esau family relocated, first to the Molotchna Mennonite Settlement and then to the Suvorovka Mennonite Settlement. Immigration to Canada followed in 1925. After farming near Langham, Saskatchewan until 1928, the Esaus came to Yarrow, BC. Here Abram worked for a time as a farm laborer. At age 17 he recommitted his life to God and shortly thereafter was baptized and received into the Yarrow Mennonite Brethren Church in June 1930. From 1935-1939 he attended and graduated from the Winkler Bible School. For the next two years he studied at the Prairie Bible Institute in Three Hills, Alberta, graduating in 1941.

Sarah Martens Esau immigrated to Canada in 1925 with her family and after several years in Manitoba, moved to Yarrow, BC in 1930. Here she continued with her schooling. Her high school education was acquired in nearby Chilliwack. As a teenager she accepted Christ as Saviour, was baptized, and received into the Yarrow Mennonite Brethren Church on 7 June 1935. She attended Elim Bible School in Yarrow and then Winkler Bible School (1937-1939, 1940-1941) from which she graduated. Abram and Sarah were married in 1942.

With the exception of three years (1965-1968) during which time they pastored the Mennonite Brethren Church in Vauxhall, Alberta, Abram and Sarah Esau served in Congo under the foreign missions program of the Mennonite Brethren Church from 1947 until their retirement in 1980. Together with other missionaries, they focused on pioneer evangelism and church planting at the Matende, Kipungu, and Kajiji mission stations during their first years. Following Congo's independence from Belgium in 1960, their role shifted to assisting the national church, especially with its lay leadership training program known as Theological Education by Extension.

Modest and unassuming, gentle and compassionate, Abram Esau was highly regarded and served with great distinction during a period of transition in the Congo from mission control to administration by the national church. Sarah too is remembered for her warmth and empathy especially in her work with women and children.