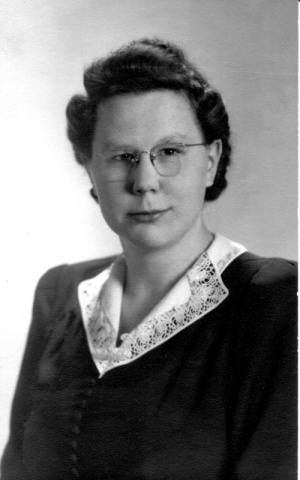 Olga Enns: churchwoman and administrative assistant; b. 3 May 1917 in Tiegenhof, a Mennonite colony in Ukraine, southern Russia to Gerhard and Lena Enns. She had three older brothers, Jake, Henry and George.

When Olga was six years old, her parents immigrated to Canada due to the war, revolution and famine in Russia with their accompanying hardships. The last hurdle in the emigration process was to pass a medical examination. Unfortunately, it was discovered that Olga had trachoma, an eye disease that required treatment before she would be allowed to leave. Since the family had already sold everything and were scheduled to depart shortly with their group, they had to make the agonizing decision to leave little Olga behind with her grandparents in order to have her eyes treated.

Later that same year, in 1924, after Olga's eyes healed, she joined another group of emigrants leaving for Canada. This was a pivotal event in her life, since this was the last group that was given permission to leave Russia at that time. Eventually, she was reunited with her family who settled in Kitchener, Ontario. Here they embraced their new life of freedom and opportunities.

In her teen years, Olga was baptized upon confession of her faith and joined the Kitchener Mennonite Brethren Church. She ended her schooling in the middle of high school and then worked in various local shirt factories. In her early 20s she attended Winkler Bible School for a year and then a local business college which allowed her to work in various business offices in the Kitchener-Waterloo area.  Her last place of employment was the Canada Trust Company where she worked for 27 years.

Christian and church ministry was always important to Olga. She taught a teen-age girls' Sunday school class.  Many summers were spent teaching Vacation Bible School locally and in the outlying districts of the Ontario Mennonite Brethren Conference. She served as church secretary, church librarian and on various committees. For 25 years she was president of the Kitchener Mennonite Brethren church Women's Missionary Service society.  In 1960 she helped to organize the Women's Missionary Service of the Ontario Mennonite Brethren Conference and was active in planning a yearly "rally" which brought together women from across the province to enjoy an interesting speaker and program.

In her 30s Olga went on a Mennonite Central Committee assignment for three years to Uruguay where she was in charge of a refugee camp in Montevideo. Since Uruguay and Paraguay had opened their doors to receive refugees waiting in German refugee camps, many Polish and Danzig Mennonites continued to arrive there. Olga hosted them, helped them with their many problems, counseled them and advocated for them. In the evening she held Bible studies. They were attended mostly by women but some men came in spite of the fact that it was a woman teaching.

Olga also went beyond Mennonite Brethren circles and joined the Stonecroft Christian Women's Club. However, this was a daytime program. Olga was instrumental in organizing the Professional and Christian Women's Club which allowed Christian business women to meet in the evenings when they were free. She remained on the executive for many years. She was also treasurer and member of the executive of the Mennonite Historical Society of Ontario from 1982 to 1987 and a board director to 1988.

After retirement Olga volunteered in a classroom for developmentally delayed children. Then Camp Crossroads of the Ontario Mennonite Brethren Conference offered her the opportunity to work in the camp office. For over ten years, she spent eleven weeks of the summer at the camp, energized by the interaction with staff and campers of all ages. It was at camp that she was introduced to the computer and she became keenly interested in becoming more proficient in its use. She also found time for travel—to Europe, Israel and many parts of North America.

In the 1999 Fall edition of Sophia Magazine, she tells of her life in the article "Seasons of Blessings." At the end she says: "Yes, I look back over my 82 years and see God revealed in all the choices and opportunities that have been mine. At this season of my life, I can still enjoy a healthy body and mind. I am overwhelmed, deeply humbled and grateful. Whatever God still has in store for me will be good and exciting."

Five years later, after some worsening health problems, Olga died on 1 September 2004. The funeral service was celebrated 6 September  at the Kitchener Mennonite Brethren Church where many attested to her vigorous, faithful and full life.