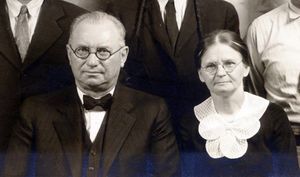 Jacob received his elementary education in the district schools near his home. He attended Bethel College four years and was graduated with the class of 1900. He taught in various rural schools for seven years. He was baptized and became a member of the Hoffnungsau Mennonite church on 8 July 1894.

Agatha Regier was born in Alta Township, Harvey County, Kansas, the daughter of pioneer parents, John K. Regier (23 May 1853-22 June 1929) and Anna Unruh Regier (15 January 1855-22 May 1950). She was the second child in a family of six daughters and four sons. She attended several rural schools in the area until she was 12 years old. Later she attended Bethel Academy for two years. Her instruction included organ lessons, and she was the first organist of the Hoffnungsau Mennonite Church. She later used this skill on the mission field.

In fall 1906 Jacob and Agatha Ediger received the call from the Foreign Mission Board of the General Conference Mennonite Church to become missionaries. They were ordained by Peter Balzer and Gustav Harder for this service on 13 January 1907 in the Hoffnungsau church. Jacob was later ordained as an elder on 4 September 1910.

Their mission work among the Cheyenne People began at Clinton, Oklahoma on 25 May 1907. Later the Thomas and Hammon districts were added to their responsibilities. They also helped to sponsor religious activities in the Government Indian Boarding School at Concho, Oklahoma. They served for 40 years in this field. According to his records, Jacob delivered 2,819 sermons, performed 94 marriages, and officiated at 322 funerals, of which 288 were Native Americans. Agatha aided the work through her knowledge gained from rearing eight children. She also taught Cheyenne People to quilt, she administered medicines and home remedies, and shared in the joys and sorrows of the Native people.

Jacob and Agatha Ediger retired to Buhler, Kansas where they lived until Jacob's death. Lawrence Hart helped to officiate at Agatha's funeral.

In his obituary of Jacob Ediger, P. P. Wedel, a longtime leader in the General Conference Mennonite Church, described Ediger's "cheerful and social nature" that enabled him to become close to the Cheyenne People. He also noted Ediger's interest in training Native American leaders to participate in the work.