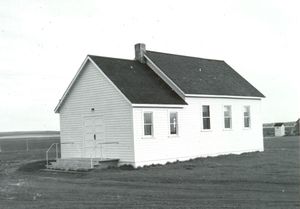 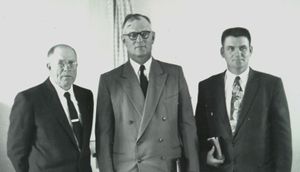 In late 1927 the Canadian Mennonite Board of Colonization began settling Mennonite immigrant families fleeing the Soviet Union in the Glidden – Madison area of Saskatchewan, in the Newcombe Rural Municipality No. 260. Many of these families were interrelated and they settled mostly on established farms. By 1929 they numbered 40 adults plus 28 children and considered themselves a Mennonite community. Church services were held in homes with Jakob Fast and Herman J. Wiebe, who had been elected as minister in the Kronsweide Mennonite Church in the Chortitza Mennonite Settlement of Ukraine, leading the worship. Also in this year the congregation wrote to Ältester Jakob B. Wiens of Herschel, Saskatchewan, for guidance resulting in this congregation formally joining the Ebenfeldter Mennoniten Gemeinde (Ebenfeld Mennonite Church) in 1933.

The early years involved much pioneering with the digging of wells, building of houses and barns, and purchasing or making furnishings and equipment. However, the years 1930-1938 were very difficult with prolonged drought and very low prices for farm produce. Most families could extend their mortgages and continued farming but eight families moved out of the community. This loss was compensated somewhat when three new families took over an existing farm. The harvest of 1939 was very good and the following years also brought good harvests. At this time members felt they now had the resource to construct a church building. Unfortunately no suitable land was available so Herman J. Wiebe offered his yard and a small building 18 x 24 feet (5.5 x 7.3 m.) was constructed in 1941. Since Wiebe also had an existing mortgage on his farm this location was considered only as a temporary location. In 1945 the building was enlarged by 10 x 18 feet (3.1 x 5.5 m.). The Wiebe farm is at: SE36-26-21-W3, (51.2599°N 109.0799°W) and in time the location proved to be permanent. The congregation used the Madison village cemetery for its burials.

As a member of the Ebenfeldter Mennoniten Gemeinde its Ältesters Jacob B. Wiens and Cornelius J. Warkentin served communion and baptisms. On 6 April 1942 Cornelius Fast was elected from the congregation as pastor and on 31 July 1942, Herman J. Wiebe was also ordained as a pastor for Glidden by Ältester J. J. Thiessen. Three years later, on 14 August 1945, Cornelius Fast was ordained by Ältester C. J. Warkentin. The congregation experienced active Sunday School and Youth groups, choir, and participated in many of the activities of the larger Ebenfeld Church. In 1958 Herman J. Wiebe retired and Cornelius Fast assumed the role of lead pastor. The congregations celebrated its 25th anniversary in that same year.

In an article in Der Bote celebrating the 25th anniversary of the Glidden congregation in 1958, Herman J. Wiebe wrote: “in our group: 64 children born, 25 people baptized, 17 weddings, 4 silver and 1 golden wedding; 4 children and 6 older people have died here (translated)”. In this article he also commented on the congregation’s land base, reminiscent of the way Mennonites in Imperial Russia were aware of their colony’s land entitlement. He wrote: “With the founding, our group held 39 quarter sections of land. Through emigration, the group lost 12 quarters, 9 of these quarters have been repurchased. Today, after 25 years of existence, our Group holds 36 quarters of paid-up land and has another 4 quarters leased (translated)”.

The Glidden congregation was always small but its members participated in many activities including youth group, ladies sewing circle, music and Sunday School. By the 1960s farms were increasing in size with more mechanization requiring fewer workers, and many of the youth were seeing better education and well paying jobs outside of the community. The congregation formerly closed in 1973 and the building was sold and moved off the Wiebe yard. Some remaining members joined the Herschel congregation and a couple of families joined the Kindersley Brethren in Christ congregation.