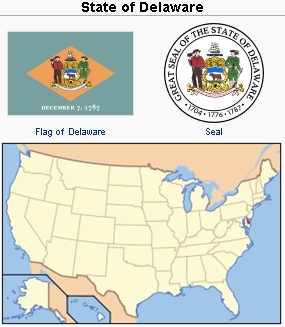 Delaware, a state on the Atlantic seaboard of the United States of America, named after Virginia's first colonial governor, Thomas West, 3rd Baron De La Warr. Originally inhabited by the Lenape toward the north and Nanticoke toward the south, it was first colonized by the Dutch in 1631. It became a part of the grant made to William Penn in 1682 and remained under the governor of Pennsylvania until 1776. It was one of the original 13 colonies to sign the Declaration of Independence and the first state to ratify the United States Constitution.

The Conservative Amish Mennonite settlement near Greenwood in Sussex County consisted of four congregations with a total membership of 467 in 1986 (Greenwood Laws, Canon Central). The Greenwood congregation established the Greenwood Mennonite School in 1928, when Mennonite students were expelled from the public schools for not saluting the flag. In 1986 this school had 151 students in 12 grades and kindergarten. Central Christian School, founded by the Central congregation in 1975, had grades 1-12 with 69 students. The Country Rest Home, Greenwood, founded in 1954 by Mr. and Mrs. L. L. Swartzentruber is a 32-bed facility for senior citizens owned and operated by Mr. and Mrs. Mark B. Yoder, pastor of the Laws congregation.

In 1987 the Old Order Amish community near Dover had eight church districts serving 261 families with a total population of 1,432. It maintained 11 elementary schools.

Tressler Mennonite Church, Greenwood, organized in 1935, is a member of Allegheny Mennonite Conference. In 1986 it had 113 members. Two congregations affiliated with Eastern Pennsylvania Mennonite Church were Highland, near Bear, in New Castle County, (26 members) and Kenton, in Kent County, (41 members). The Kenton Mennonite School had 14 students in 1986.

The Pine Shore Conservative Mennonite Fellowship near Delmar, in southern Sussex County, withdrew from a congregation just south of the Maryland line and numbered 14 members.

The Wilmington Mission was founded by the Greenwood Conservative Mennonite Church in the 1940s. Later it served Spanish-speaking worshipers, under sponsorship of the Lancaster Mennonite Conference (MC). It was closed and the property sold in 1987. -- Ivan J. Miller