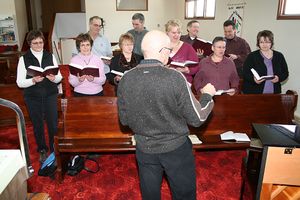 Services were first held in Birch River in the United Church building. The congregation formally organized in 1971 under the Evangelical Mennonite Conference when Andrew Friesen was the pastor.

Ralph and Mary Lynn Unger took over the pastorate in 1972. When Ralph Unger returned Steinbach Bible Institute for further training in 1980-1981, Leroy Friesen filled in the pastorate role. Financially supported by Christian Fellowship Church and the Evangelical Mennonite Conference, Ralph Unger, a trained teacher, supplemented his income by driving a school bus and substitute teaching. Ben Kroeker, who had been a deacon in the Rosenort Evangelical Mennonite Church, moved to the area in 1971 with his wife Helen, and began to serve as a deacon in Birch River.

Building construction was started in 1975 and the building was occupied in June 1976. For a time, the church had a manse a mile out of town.

John and Becky Hiebert served as the pastoral couple from 1986-1989. Ferlin Abrahamson, a graduate of Nipawin Bible Institute and raised in Pelly Fellowship Chapel, served as pastor for many years. He was partly self-supporting, working as a farm hand.

Glen and Betty Koop served as an interim pastoral couple from January to December 2008. Harold Thiessen, a local farmer who had studied at Steinbach Bible Institute, served as pastor from 2009-2012.

When Harold Thiessen moved to Kleefeld after 2012, the congregation continued without a formal pastor. Ferlin Abrahamson informally functioned as the pastor. Ferlin and Elizabeth Abrahamson’s daughter Bethany Matejka, a graduate of Canadian Mennonite University, served as congregational chair.

The area’s population decline has resulted in fewer farms and less people attending Christian Fellowship Church in Birch River, but in 2017 the church still held weekly services – often with guest speakers or a video series. A key ministry was still the Steeprock Bay Bible Camp, supported by a thrift store in Birch River. Christian Fellowship Church served as an evangelical church for the area.