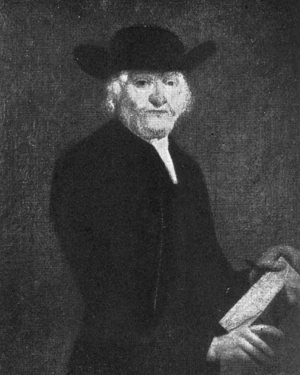 Wolter ten Cate was born 28 August 1701 at Hengelo in Twente, a district in the Dutch province of Overijssel; he died at the same place, 8 August 1796. In 1720 he took over his father's textile factory, developed it into a flourishing industry, and consequently became wealthy. He was one of the founders of big industry in Twente. According to a tradition, he was taught the skill of damask manufacturing by weavers from Danzig. Wolter ten Cate, himself descended from a very old Mennonite family, was married in 1725 to Tjilke Jans Dijk, of a well-known Mennonite family in Groningen. The marriage was childless. Ten Cate gave much of his time, devotion, and money to the church. In 1736 he was chosen minister of the Groninger Old Flemish congregation at Borne, although he lived in Hengelo. This congregation he served until 1757, when he became minister of the congregation at Hengelo. In 1755 he was chosen overseer (opziener) of the Groninger Old Flemish congregation, a position which was similar to that of elder (oudste). Henceforth it was his task to visit the various congregations in the Netherlands, a charge he performed with great zeal. In the congregation he was a person of great influence. Wolter-Oom (Uncle Wolter), as he was called, was a veritable patriarch among his own people. He exerted a marked influence on the confession of faith drawn up by the Groninger Old Flemish in 1755. His material bounty he shared liberally with his congregation; in 1791, toward the end of his life, he made it possible for his congregation at Hengelo to have a new church, but with the emphatic stipulation that above all it should be sober and simple in appearance.