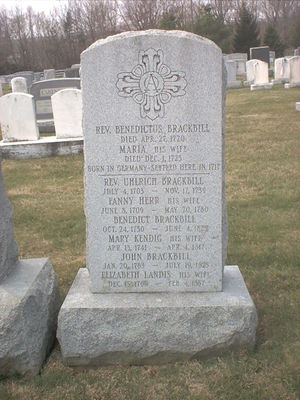 Brechbill was received into the Mennonite church there at the age of 20 and was made their preacher about 1699. In 1701 he married Marie Herr (1673-1725), a sister of Hans Herr. Exiled twice for his faith, he returned each time. He tried to persuade his wife and children to leave with him and settle in Mannheim. But he was suddenly seized at his home early in the morning, bound, and taken to Bern, thrown into the tower, fastened to a chain, and left in the dungeon 18 weeks. Then he was taken to the "hospital" with other prisoners, where for 35 weeks he had to work "at the wool" from four in the morning until eight at night. On 18 March 1710 he was put on a ship with 56 other Mennonites for forcible deportation to America. He was released in Nijmegen and at once made his way via Kleve and Krefeld back to Mannheim. Here he was chosen elder of the congregation.

As the representative of the Dutch Mennonites he rendered a very useful service. He repeatedly wrote to Holland, reporting the unhappy state of the Mennonites in the Palatinate and in the canton of Bern. With Hans Bürcky and Melchior Zahler he traveled to Amsterdam at the invitation of the Dutch, and there answered 24 questions on conditions in Switzerland. To the Dutch government or to the city council of Amsterdam they presented a written self-defense, giving a clear, but brief confession of their faith (Brons, 198f.). After numerous conferences and visits they left Amsterdam on 6 June 1710 with a brotherly farewell and a gift of 50 guilders for travel expenses and returned to Mannheim. Bürcky and Zahler went on to Switzerland, where they were again imprisoned. Brechbill felt himself bound by his promise to the Dutch Mennonites at The Hague not to return to Switzerland without their consent. In a letter of 7 May 1711 he stated that his three children had arrived safely from Switzerland, but requested to be released from his promise because the Brethren in Switzerland desired his presence. He apparently did not enter upon this journey.

When the plan was announced to settle the Bernese Mennonites on a moor to cultivate it, Brechbill declared the project unacceptable. On the other hand, the idea of settling in Prussian Lithuania on a very favorable offer of the King of Prussia appealed to him. With Hans Ramseier and Uli Bauer he journeyed to Berlin and had a personal conference with King Friedrich I of Prussia. Then they went to Lithuania to view the proffered land. Their impression was favorable, but they were unable to induce the Swiss to settle in Prussia.

Brechbill did not stay in Mannheim long. On 6 February 1714 he wrote to Holland that conditions in the Palatinate were wretched in consequence of the war. This may have suggested the idea of emigrating to America. In the spring of 1717 we see him at the head of a large train of emigrating Palatine-Swiss Mennonites, who left for America from Rotterdam, arriving in Philadelphia, 24 August. He received from the Dutch Committee for Foreign Needs the sum of 4,000 guilders for distribution among the emigrants. The Mennonite Archives at Amsterdam contain a number of letters written by Brechbill, giving interesting information concerning the persecution of the Swiss and the Dutch aid.

Brechbill went at once to Strasburg, Lancaster County, Pennsylvania, and claimed 150 acres of the John Funk tract and 100 more for his son Ulrich (later confirmed to his grandson John). The Brechbills had three children. Barbara married Jacob, son of Hans Groff, the ancestor of the Strasburg Groffs. Maudlin (Magdalena) married Emanuel, son of Hans Herr who was the paternal ancestor of John Herr and through the maternal side of Bishop Abraham Herr. Ulrich, the only son, also a preacher, was the ancestor of the Lancaster County Brackbills. Ulrich died in 1739 by an accident on the road to Philadelphia.

It is quite possible that Benedikt Brechbill's home served also as a meetinghouse for worship in the Strasbourg section. A second "Brackbill home," serving in the same capacity, was built after Benedikt's death, in 1740. Brechbill not only took up land upon which he lived permanently but also assisted his fellow believers spiritually and even financially to start aright in the wilderness of Pennsylvania, not very far from the Hans Herr colony. He was noted for his fine singing in church services. He was a helpful minister on both sides of the Atlantic, and an outstanding relief worker during a time of testing and difficult migration.

While in Holland, he learned the Dutch language, which enabled him to translate J. P. Schabaelje's popular work, Wandelnde Seele (Wandering Soul), into High German (between 1710 and 1714). This is at least the present-day interpretation of the three initials B.B.B. on all German editions of this book. This translation provided his people with a fine devotional book in days of much distress.

Jecker, Hanspeter. "Bendicht Brechtbühl (1666-1720) of the Emmental: Anabaptist teacher, bridge builder, and border crosser." Mennonite Quarterly Review 89, no. 3 (July 2015): 405-465. [This is the most recent scholarship on Brechbill, and is not reflected in the present article.]