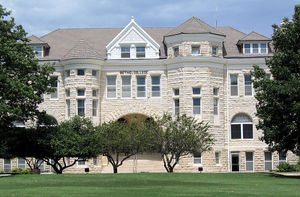 Bethel College, affiliated with Mennonite Church USA (formerly the General Conference Mennonite Church), is an institution of higher learning located at North Newton, Harvey County, Kansas. It owes its origin to the desire of the Mennonites who emigrated from Russia to Kansas in 1874 and the years following to maintain and perpetuate their special heritage. The preparation of their own teachers and church workers was considered a necessary prerequisite to the achievement of this end. The study of the English language was urged from the very beginning, both as a means of social intercourse with their American neighbors, and as a prerequisite for doing religious work among the English-speaking population. Within three years after the arrival of the first major immigrant groups in this country repeated calls were issued in <em>Zur Heimat</em> for a conference of schoolteachers, religious teachers, and elders to consider school matters. Such a meeting was held on 15 November 1877 in a rural schoolhouse in the Alexanderwohl community about 10 miles (16 km) north of Newton, Kansas. This meeting adopted a set of resolutions the most important of which "recognized the necessity of establishing a Zentralschule in which capable young men . . . could acquire the necessary training for teachers."

The movement resulted in the establishment of the Emmetal school. This was conducted in a private schoolhouse in the Alexanderwohl community during 1882-1883 with H. H. Ewert as teacher, under the control of the school committee of the Kansas Mennonite Conference. Thirty students attended the school during the eight-month term. Its purpose was stated to be the preparation of candidates for rural schoolteachers' examinations. However, unsatisfactory housing conditions and a limited curriculum proved serious handicaps. It was evident from the very beginning that, unless more satisfactory facilities could be provided, the future held little promise for the school.

The school was transferred the following year to Halstead, Kansas, where a group of brethren, the Halstead College Association, had erected a building which was placed at the disposal of the Kansas Conference rent free for a period of five years. The curriculum was expanded, an additional teacher, P. J. Galle, was employed, and school was opened 20 September 1883. It was officially called "Mennonitische Fortbildungsschule"; its English designation was "The Mennonite Seminary." Seventy-two students attended the school the first year. Its main objectives were: the preparation of rural public school teachers, German parochial school teachers, and church workers. Regarding the third objective, special emphasis was placed upon the preparation of workers for the foreign mission field. As in the case of the Emmetal school, only men students were admitted the first year, but girls were admitted tentatively early in the year and coeducation soon became the accepted practice.

The improved facilities attracted a larger attendance and soon proved inadequate, but expansion was impossible, primarily because of the lack of funds. It was then decided to incorporate the Halstead school under the name of Bethel College and to solicit a fund of $100,000. One half of this fund was to be used for endowment, the other half for the erection of suitable buildings.

But while these matters were under consideration the city of Newton made an offer of $15,000 in cash and land valued at $85,000 to the Kansas Mennonite Conference if the school would be located at Newton. A special meeting of the conference, held at Halstead on 27 April 1887 was not ready to accept the Newton offer, but authorized David Goerz, Bernhard Warkentin, and John J. Krehbiel to form a private corporation which could incorporate, build, and control the proposed Bethel College in all details.

Such a corporation was quickly formed. A charter was drawn up which was signed by 33 persons, and approved by the Secretary of State of the State of Kansas on 23 May 1887. The corporation was called "The Bethel College of the Mennonite Church of North America at Newton, Harvey County, Kansas," and the governing body was defined as a board of nine members, three to be elected annually for a term of three years.

The new corporation was given permission to solicit funds within the Mennonite congregations, although the change from conference to corporation (i.e., private) control did not meet with universal approval and the doors were left open for the resumption of conference control. An aggressive financial campaign was undertaken, building operations were begun, the basement was completed, and the cornerstone laid on 12 October 1888. This date has become historic in building operations at Bethel College, and the cornerstones of Science Hall, Memorial Hall, and the new library were laid on the corresponding dates of 1924, 1938, and 1948 respectively. The new building was dedicated on 19 September 1893, and school opened the next day. Five teachers were employed and the total enrollment for the year was 98. No courses of college rank were offered; in fact, much of the work was on the elementary level.

It had been planned originally to continue the Halstead Seminary as a preparatory school for Bethel College, but the new institution took over the teachers and much of the equipment of the Halstead school and the latter was closed permanently on 7 June 1893. The first curriculum of Bethel College consisted of a preparatory course, an academic course, and a prospective college course, each of three years in length. There were no electives.

The new institution was beset with difficulties from the very beginning. The enlarged faculty and the expanded curriculum soon proved inadequate. Library facilities were meager and laboratory facilities were entirely lacking. Extracurricular activities were left entirely to student initiative. There was constant pressure from the student body for further expansion. The curriculum underwent repeated revisions in the effort to meet the needs of both Mennonite youth and the Mennonite Church, and at the same time keep abreast of modern educational trends. The scope of the curriculum was expanded to include applied arts and sciences. Curricula then offered led to the B.A., the B.S., and the Th.B. degrees. The first college degrees were conferred in 1912. Bethel College also conferred honorary degrees in recognition of distinguished service rendered.

The library in 1953 contained more than 30,000 volumes, and received more than 200 magazines regularly. A new library building was completed in 1952. Alumni Hall, erected by the alumni of Bethel College in 1913, housed the Kauffman Museum, which contained a large and valuable collection of articles covering a wide field and arranged under three major divisions, historical, natural history, and art. Science Hall, erected in 1924-25, provided modern facilities for instruction in the natural sciences. Memorial Hall, dedicated in 1942, provided the facilities for indoor physical training. The kitchen and dining facilities were also located in this building for many years. Its auditorium had a seating capacity of approximately 3,000. The Franz General Shop, erected in 1947, housed the facilities for industrial arts and general shopwork.

Student industries were introduced in 1936. These assisted many students in acquiring a college education. Scholarships, assistantships, and loan funds provide additional student aid.

Approximately 20 student organizations and activities in the 1950s provided a wide range of extracurricular opportunities to Bethel College students. In the religious field were the Student Christian Association, Student Volunteers for Christian Service, Student Ministers' Fellowship, and the Student Peace Group. Debate, oratory, and dramatics were open to those interested in speech. International Relations Club, Biology Seminar, Cheminar, and other departmental clubs were supported by many students. Both intramural and intercollegiate athletics were stressed. Among the most widely known college organizations was its a cappella choir, The Mennonite Singers. The Collegian and the Graymaroon were the two student publications. The Memorial Hall Series provided high-class music and lecture numbers not only for the students but also for the constituency within several hours' driving distance from Newton.

The Mennonite Historical Library, established in 1936, was an important center of research for students of Mennonite history. It contained over 7,000 catalogued volumes in 1950, some of them rare and extremely valuable, and a large collection of Mennonite periodicals, reports, yearbooks, diaries, letters, photographs, etc. Constant additions were made to the collections.

The College published since its beginning annual catalogs, reports, the School and College Journal (1898-1902), Bethel College Monthly (1903-1934), <em>Mennonite Life</em> (1946- ), the Collegian, and a number of books mostly printed in the Bethel College Press, which was reorganized in 1949 and known as the Mennonite Press owned and operated by the College and the General Conference Mennonite Church.

There was a fairly steady, though somewhat irregular growth in attendance until 1949, since then a decline. The total attendance to 1949 exceeded 6,700. Of this number, approximately 2,000 served as public or parochial school teachers and in colleges and universities over wide areas. More than 300 entered the ministry and the mission field and more than 125 served as physicians and nurses. The number entering other specialized fields of service in church, state, or nation exceeded 150. The maximum enrollment up to 1953 was reached in 1938-40, when it totaled 525 (in 2006/07 enrollment was 539). The faculty increased from 5 full-time to more than 40 full- and part-time instructors (65 in 2006/07). The academic status of the faculty rose steadily and now ranks high among denominational colleges. In 1916 Bethel College was fully accredited by the Kansas State Board of Public Instruction and in 1938 it was admitted to membership in the North Central Association of Colleges and Secondary Schools. The College is also a member of the Kansas Council of Church Colleges, the National Conference of Church-Related Colleges, the Association of American Colleges, and the American Association of Colleges for Teacher Education.

The most difficult problem that has confronted Bethel College during the years has been the finances. But here, too, a gradual change for the better has taken place, especially in mid-20th century. At the opening of Bethel College in 1893, its endowment fund approximated $60,000, its plant value was $43,000, and the net worth of the institution was $103,000 (Sechster Jahresbericht des Bethel-College-Direktoriums, 1892-93). In 1952 the endowment fund had reached nearly $654,000, the plant value $870,000, and the net worth exceeded $1,577,000. Bethel has no indebtedness at that time.

A revised statement of the aims and purposes of Bethel College was adopted by the faculty and the Board of Directors in 1936, and in 1942 the college adopted the "Statement of Faith of the Mennonite Church of North America," which the General Conference had adopted in 1941, as its own. These were published in the annual catalog.

In accordance with these aims Bethel College sought first and foremost to serve the constituency in its most immediate needs, particularly in teaching, the ministry, and the mission field. But Bethel College also aimed to foster a love of learning and a spirit of inquiry that would lead to further development of native talents and abilities, and thus enable the individual to serve the larger community and in more specialized fields. Bethel College graduates took up graduate work in increasing numbers and found their way more and more into highly specialized fields, the different professions, social service, government service, and research.

Peters, H. P. History and Development of Education Among the Mennonites in Kansas. Hillsboro, KS:, 1925.