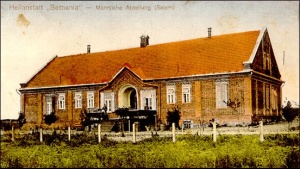 The Bethania Mental Hospital was established in 1910 on the land of the former village of Alt-Kronsweide, Chortitza settlement, Russia, by the Allgemeine Bundeskonferenz, patterned after Bodelschwingh's "Bethel" at Bielefeld, Germany, was the first Mennonite mental hospital and the only one established in Europe., On 15 March 1911, the "Bethel" unit was opened providing room for 16 women, and was followed by the "Salem" unit on 20 August 1911, housing 16 men. Among the 53 patients cared for from 15 August 1911 to 1 December 1912, were 11 acute and 20 chronic mental cases; 8 were epileptic, 12 developmentally limited, and 2 with organic nervous disorders. Of these, 2 were dismissed as healed, 3 as improved, 6 without improvement, and 3 died. Eleven patients had no training, 34 had elementary school, 7 had secondary school, and one was a university graduate. About one third of the patients were admitted free while the others paid 240 rubles per year. The total income (including money for building) by 1 July 1912, was 262,339.90 rubles. The value of Bethania was estimated at this time as being 219,630 rubles.

In March 1911, 22 more beds were added in each division, providing a total of 76 rooms. Of the 88 patients cared for during this year, 2 were under 10 years of age, 19 between 10 and 20, 17 between 20 and 30, 26 between 30 and 40, 8 between 40 and 50; 61 were unmarried, 21 married, and 6 widowed. Almost all Mennonite settlements were represented. Mennonite patients received preference but others were also accepted. Originally the institution had been planned as one sponsored by all Protestant groups in Russia, but this intention could not be accomplished. The conference was the sponsor and owner of Bethania. It was operated by a board of eight directors, most of whom were leading businessmen and industrialists with J. J. Suderman as chairman, and J. G. Lepp as treasurer. Contributions were raised throughout the settlements and congregations. During the second half of 1912 they amounted to 27,600 rubles. However, some of the industrialists and large estate owners contributed up to 40,000 and more. The budget for the year 1912-1913 was 37,956.67 rubles. Many of the contributions came in as gifts-in-kind.

The first housefather was Peter Schellenberg, who was succeeded by Jakob K. Janzen (1912-1920). Some of the nurses had received training in Bielefeld. The first doctor was W. Stieda, who was later assisted by I. Thiessen.

World War I stopped the rapid development of Bethania and the following Revolution brought it to a gradual end. The report of 1925 summarizes the results of the activities of Bethania during, the 15 years of its history. During this time Bethania had had a total of 991 patients, of whom 203 were buried in its own cemetery. Five different doctors, 78 male nurses, 86 female nurses, and 353 additional staff members had served the institution. Of the 204 patients cared for during the year 1925, 101 were Russian, 87 German, and 16 Jewish. After the Revolution the institution was taken over by the province and in 1925 by the federal government. Of the 32,297 rubles received in 1925, 4,868 still came from Mennonite congregations and the rest from the government. The institution still farmed some 200 acres of land. Help in addition to the regular nurses came from the medical school at Halbstadt, Molotschna, which used it for internship.

When in 1927 the village of Einlage (Kitchkas) came under the backwater of the Dneprostroy power dam, Bethania had to be evacuated. At this time Dr. Erich A. Tavonius and Dr. I. Thiessen encouraged the Mennonite constituency to appeal to the government to transfer Bethania to Halbstadt. However, this did not materialize. On 9 May 1927 the patients, among them 33 Mennonites, were transferred to a mental hospital at Igren without the Mennonite personnel. That was the end of Bethania, one of the most successful and generally supported projects among the Mennonites of Russia. Dr. I. Thiessen had been connected with the institution almost throughout the 16 years of its existence. The last housefather was J. P. Wiebe.