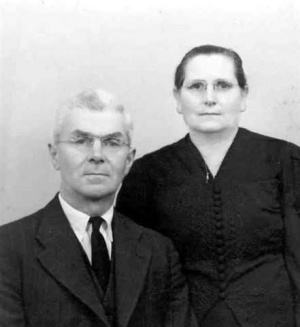 In his youth Jacob spent much time reading the Bible, which prepared him for his future work in the church. He was baptized in 1909 in the Dnieper River by Henry Hildebrant and received into the Einlage Mennonite Brethren Church.  In 1910 the family moved to Kharkov, settling in the village of Vassilyevka in the Naumenko Colony. The spiritual environment there had a very positive influence on Jacob's life.

When war broke out in 1914 Jacob served in the medical corps on the Western Front for four years. In 1918 he returned to Vassilyevka, where he met and married Katharine Dyck. They lived with his parents for one year before Jacob was called into the White Russian army. Upon his return to Vassilyevka in 1922 there was a great revival in the area, which inspired Jacob to become active in church work and preaching. He was privileged to attend ministerial courses conducted by Brother Hoheman of the Baptist Church in Bozobotofka.

In 1926 Jacob and Katharine and 4 children immigrated to Canada staying one year in Aberdeen, Saskatchewan, then moving to a farm in Riverhurst, Saskatchewan. They attended the Gilroy Mennonite Brethren Church where Jacob was the leading minister. During this time the church was privileged to experience revival. Because of drought and crop failure, the family moved to northern Saskatchewan, first to Mullingar in 1933, then to Glenbush in 1935 and in 1938 to Redfield. At each location, Jacob was involved in church ministry and preaching. In 1938 Jacob was ordained by H. S. Rempel in the Glenbush Mennonite Brethren Church. Katharine, though busy with the growing family, was Jacob's constant encouragement and support.

In 1944 Jacob and Katharine moved to a farm in Chilliwack, British Columbia and he became the leading minister of the East Chilliwack Mennonite Brethren Church in 1946. A year later, when 60 families left the rapidly growing East Chilliwack congregation to form the Chilliwack Mennonite Brethren (later Broadway Mennonite Brethren) Church, Jacob was again appointed as leading minister. He held this position until 1958. Jacob and Katharine did much entertaining and house visitation, always remembering the sick and neglected. Jacob was a person of strong convictions, which at times caused friction and disagreement, but his forgiving spirit and compassionate nature generated peaceful solutions. He often retreated to his study for prayer. Jacob pursued the truth of Scripture and lived his life in sincere and genuine service to God.