From GAMEO
Revision as of 01:54, 11 March 2019 by AlfRedekopp (talk | contribs) (→‎Bibliography)
(diff) ← Older revision | Latest revision (diff) | Newer revision → (diff)
Jump to navigation Jump to search
A checked version of this page, approved on 11 March 2019, was based on this revision. 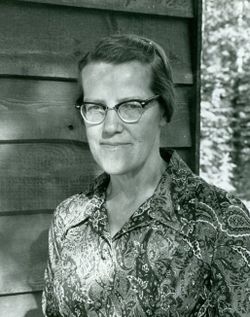 During the famine in 1922, Nettie’s parents had taken over the care of a two-year-old girl, Annie. In 1925, when Nettie was two years old, the family left for Canada and settled in Dalmeny, Saskatchewan. In 1936, they moved to Coaldale, Alberta, where Nettie was baptized and joined the Coaldale Mennonite Brethren Church on 25 August 1940 following her conversion at age 13.

In 1941, Nettie graduated from the Coaldale High School, and in 1945, she completed a nursing program in Lethbridge, Alberta. In 1947, she began classes at the Mennonite Brethren Bible College in Winnipeg, Manitoba, to help prepare her for mission work. She graduated in 1950 and continued her medical training at the Royal Victoria Hospital in Montreal, Quebec, and Concordia Hospital in Winnipeg.

In December 1950, Berg applied to work with the Mennonite Brethren Board of Foreign Missions. After another year of studies at Tabor College in Hillsboro, Kansas, USA, she left for the Belgian Congo (later Zaire, now the Democratic Republic of the Congo) in central Africa on 20 June 1952. While she was there, she worked as a nurse and helped in producing literature for a Bible correspondence course for adults.

During her years of service, she moved several times as her jobs changed. She worked as a nurse in Matende and Lusemvu before the revolution forced many missionaries to leave in 1960. After spending two years back in North America, she returned to Lusemvu before moving on to work at the Librarie Evangelique in Kikwit. Other than several trips back to Canada, Nettie spent the next years working in Kikwit and Idiofa, and also in the capital city, Kinshasa, where she worked with the Emmaus Bible School by correspondence.

In 1970, Nettie suffered a detached retina and had to return to Canada for surgery. While she was recovering, she stayed with Margaret Riediger, who had formerly worked with the Alberta Conference of Mennonite Brethren Churches on a correspondence course for children called the Mailbox Bible Club. When Nettie was unable to return to Zaire because of changed circumstances in that country, she instead began to work with the Mailbox Bible Club, which grew to include over a thousand children. In 1980, she wrote a children’s book, Jackoo’s Secret Letter, based on her African experiences, and she later wrote other stories and Bible lessons. She was diagnosed with cancer in 1998 and later moved to the Sunny South Lodge in Coaldale. She died at the Coaldale Health Center on 27 April 2013.

Nettie Berg made an important contribution to mission work in Africa and in Canada. Through her various forms of service, she left an example of commitment for others to follow.