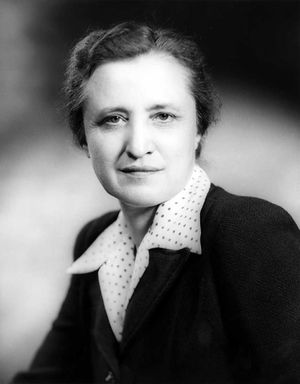 Ruth Elaine Bender: educator, clinician, and expert in hearing disorders and deaf education; born 24 February 1902 in Springs, Pennsylvania, USA to Daniel Henry "D. H." Bender (18 January 1866–22 January 1945) and Ida E. (Miller) Bender (15 December 1876–4 May 1902). Ruth Bender was the third child born to D. H. and his first wife, Ida, who died when Ruth was two months old. D. H. Bender married three times, and Ruth was the third child of his five sons and two daughters. She never married. Ruth died 3 May 1998 in Goshen, Indiana, and is buried in the Elkhart Prairie Cemetery in Goshen.

After her mother died, Ruth lived with her maternal grandparents, Elias M. and Catherine J. (Miller) Miller in Pennsylvania (1902–1910) and Virginia (1910–1913). In 1913, at age 11, Ruth went to live with her father and his second wife, Sallie L. (Miller) Bender (17 April 1878–29 November 1918) in Hesston, Kansas where D. H. Bender was the principal of Hesston Academy and later became the president of Hesston College. Ruth graduated from the Hesston Academy in 1920 and received a bachelor's degree from Hesston College in 1927. She began teaching Latin and French at Hesston College and obtained a master’s degree in English and French from the University of Iowa in 1929.

In the summer of 1930, an explosive story ripped through the Hesston community. During a revival meeting at Hesston Mennonite Church, 27-year-old Ruth was pressured to reveal "secret sins." She disclosed that when she was a teenager she was the victim of incestuous abuse at the hands of her father. The pastor, Maurice A. Yoder, who was Ruth's former classmate and also a faculty member at Hesston College with Ruth, her brother Paul, and her father, D. H. Bender, chose to make her private religious "confession" public knowledge.

Ruth's father, D. H. Bender, was forced to resign as college president, pastor, and bishop. Ruth planned to continue as instructor of Latin and French at Hesston College in the fall, and the Mennonite Board of Education, the local board, and the school faculty supported her. In late August, Maurice Yoder (the pastor and faculty member who publicized the story) expressed his opinion that they should "quietly take Ruth out." The Hesston community threatened to boycott the school if she remained on faculty. After much back and forth, and despite the support of the broader Mennonite community, Ruth was fired from Hesston College.

In 1931-32, Ruth obtained a second bachelor's degree, from Pestalozzi-Froebel Teachers College in Chicago, where she studied nursery and kindergarten education. After moving to Pittsburgh in 1934, Ruth studied at the Western Pennsylvania School for the Deaf, where she subsequently taught from 1935-1946. In 1946, Ruth moved to Cleveland, Ohio and began teaching preschool classes for deaf children in East Cleveland Public Schools. She joined the faculty of Western Reserve University as an instructor of speech and hearing. In 1956 Ruth completed her doctorate and was named an assistant clinical professor of speech pathology and audiology at the Western Reserve University Speech Department.

In 1960 she published The Conquest of Deafness, the first comprehensive history of the field of deaf education. Ruth worked for more than two decades at the Cleveland Hearing and Speech Center, where she became the associate director in charge of children's auditory disorders. After 30 years of teaching the deaf, Dr. Ruth Bender said, "I know easier ways of earning a living, but none is half as exciting to me. I am happiest when I give speech to a wordless child."