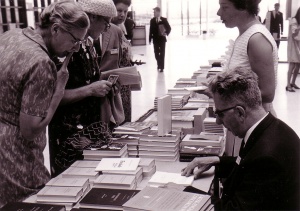 Ernst Behrends, b. 19 May 1891, d. 1982, was a North German writer whose major work, a series of six historical novels titled collectively Das Volk der Wanderschaft, deals with the history of the "peaceful " Anabaptists. Earlier literary treatments and literary research on Anabaptists had dealt almost exclusively with the more violent Anabaptists at Münster.

Behrends was a high school teacher in MöIln from 1911 to 1939, with the exception of his brief military service, cut short by a serious head wound. Even though he lived in North Germany close to the "Menno-Kate " (Menno Simons cottage) near Oldesloe, he did not know about the "peaceful " Mennonites until 1929, when 6,000 Russo-Germans (including 4,000 Mennonites) were housed in a refugee camp in Mölln. His contact with a type of Christianity which rejected force and revenge (Gewalt und Rache) impressed him to such an extent that he spent 1950 to 1966 studying and giving literary shape to Mennonite history, tracing the movement of Mennonites from Holland to North Germany, then to Prussia, later to Russia, then to Germany (Mölln in particular), and from there to North and South America.

Behrends published at least five additional novels, four short stories, nine books of poetry, and many articles (including several about Mennonites). The Mennonite Library and Archives in North Newton, Kansas, has the most complete collection of his works, including typed manuscripts of several of his novels.