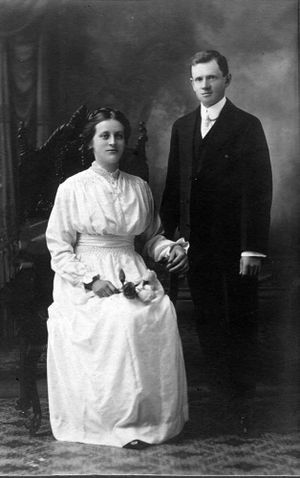 Ontario Mennonite women began to organize to do mission and relief work early in the 20th century. Martha Snyder Bechtel performed leadership roles in her congregation and beyond from 1915 to 1941. At the same time, she was a solicitous neighbor to those who lived nearby.

Like many Mennonite young people of her generation, Martha was not able to attend high school, but in 1913 she attended Goshen College in Indiana for one year where her future husband, Nelson Bechtel, was studying music. Her college experience no doubt broadened her worldview, particularly of Mennonite missions and how women could work in the church.

Back home, on 1 December 1915, when her mother Mary was in charge of launching a women's group at Wanner church, Martha was able to help her on matters such as voting and electing officers. Martha and her mother were given committee positions and one year later Martha was elected president, replacing Ada Bechtel, a sister of Nelson, who by then was Martha's husband. Among first-year projects of the women's group was sewing for an orphanage in Kitchener and raising funds to provide mouthwash for World War I soldiers.

Martha's leadership skills were put to use beyond her congregation when she was elected vice-president of the district executive of the Mennonite women's organization in Ontario in 1929. After long-time president Amelia Nahrgang fell ill and died in the winter of 1936, Martha filled the role and then was elected president at the spring 1937 meeting. She was president when World War II broke out, a time when the women did much sewing for relief.

Already in June 1918, when Ontario women hosted a bi-national Mennonite women's conference, Martha was a member of the planning committee. Those event planners eventually became the executive of the Ontario Branch of “The Mennonite Woman's Missionary Society.” In 1929, that society was disbanded and the women's organization became known as the General Sewing Circle affiliated with the Mennonite Board of Missions and Charities, based in Indiana. There were numerous district sewing circles including the one in Ontario.

Although more broadly based organizations demanded a lot of her time and energy, Martha didn't neglect her own neighborhood. According to her family, she took food across farm fields to ailing neighbours, made up Christmas baskets for needy families, helped Mennonite refugees who came from Russia in the 1920s and drove around her community with a horse and buggy with her Wanner colleague Mabel Groh, inviting people to come to church. One Sunday morning, on the way to church, family members recall, the Bechtels saw some boys fishing in the local river. Martha had the vehicle stop and she invited the boys to come to Sunday school.

Ever alert to needs and opportunities she saw in her community and beyond, she responded as she was able despite struggles with her own health. Martha Bechtel accomplished a lot in her too short life. Sadly, she died at the age of 52.