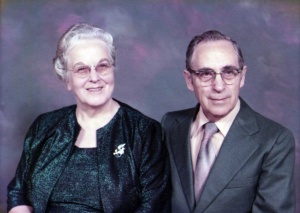 Harold David "H. D." Groh: mission worker, educator and pastor; born 22 November 1900 on a farm near Preston (now Cambridge), Ontario, Canada to Anson and Lovina (Bechtel) Groh, the youngest of six sons and five daughters. Cora Isabelle (Gingrich) Groh: teacher, mission worker and leader among Mennonite women; born 9 June 1907 also on a farm near Preston to Enoch and Rebecca (Witmer) Gingrich, the seventh in a family of seven sons and six daughters. Both Harold and Cora were baptized as teenagers, Harold at Wanner and Cora at Hagey (now Preston) Mennonite churches. They were married on 29 June 1929 at Hagey Mennonite Church. They had eight children, two of whom died in infancy. Harold died on 23 September 1981 and Cora on 9 January 2000, both at Fairview Mennonite Home in Cambridge. They are buried at Wanner Mennonite Church cemetery.

In an era when most Mennonite farm children left school after grade eight, Harold Groh attended high school in Galt (now Cambridge), earned a BA at McMaster University (then located in Toronto) in 1926 and while directing the Mennonite Gospel Mission in Toronto, completed high school teaching qualifications at the Ontario College of  Education (1944-1945). Cora Gingrich was the first of her family to attend high school in Galt and to have a professional career. After “Normal School” (teacher training) in Toronto, she taught elementary school for several years before marriage and again in the 1950s and 1960s. Education was a given for the Groh children, among whom are teachers, a minister and two doctors, one of medicine and one a physicist.

While Cora and Harold were students in Toronto, they participated in a "Mission Circle" with other young people preparing for church work. A "circle letter" kept them connected for decades. After their marriage, the Grohs lived in Kingston, Ontario until the Mennonite Mission Board of Ontario called them to direct the mission in Toronto in 1931. Harold was named superintendent, which included preaching (he was ordained in 1932), teaching and visiting. He also commuted to Fort Erie, Ontario to do some part-time teaching at a Brethren in Christ school (now Niagara Christian College). Cora organized activities at the busy mission house, which was home for the growing Groh family and two women workers. On Sundays, Mennonite students and domestics working in the city came to help with Sunday services and stayed for dinner. Cora hosted a constant stream of visitors as well as weekly women's meetings. There was little money, but Cora made sure her children were well dressed in clothes she created, paying no heed to prevailing Mennonite conservatism.

In the early 1940s, the Mennonite Conference of Ontario named a High School Committee to study a proposal to open a Mennonite high school. Harold, the conference secretary (1940–1952), was a committee member. Rockway Mennonite School opened in September 1945 with Harold as the founding principal. He taught full time and did all the administrative and promotional work with no support staff. He always struggled to support his family on his meager mission and Rockway salaries, supplementing his income by taking on summer manual employment. After 11 years at Rockway, Harold resigned in April 1956. Subsequently, he taught high school math in Chatham, Ontario (1956–1957) and St. Catharines, Ontario (1960-1961).

Moving to Preston and Rockway was difficult for Cora, who thrived on the whirl of activity in Toronto, but she got involved in women's activities at Wanner Mennonite Church. She helped organize a new evening group which elected her president. From 1947–1955 she served as vice-president then president of the Mennonite Sewing Circles of Ontario. Also in 1947 she was named secretary of girls' work on the General (bi-national) Sewing Circle Committee and attended Mennonite women's and mission meetings across North America.

In 1957 Harold and Cora accepted a Mennonite Board of Missions and Charities assignment to manage the Mennonite Centre in London, England. The center served as temporary lodging for students from commonwealth countries and mission workers enroute to and from North America, Africa and Asia. Again their home buzzed with activity and endured the chaos of too many people – including the occasional aristocrat. Cora plied her considerable hosting skills, loving every minute of it. London was the highlight of her life. In her words, "It was smashing....I feel it such a waste of time here to sleep."

Harold and Cora Groh returned to Ontario in 1960 to teaching and pastoral ministry at Bloomingdale Mennonite Church until retirement. Harold, whose wry sense of humour tempered his usual serious reserve, and Cora, his flamboyant partner, dedicated the best decades of their lives to leadership in the church. Their commitment and hard work in pioneering in Mennonite high school education, mission work, women's activities, church administration and ministry have left an indelible mark on the Mennonite Church in Ontario.