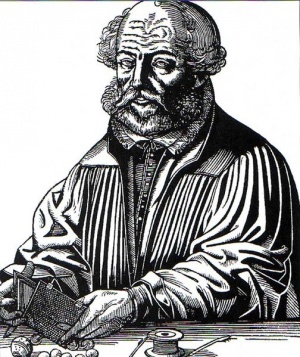 Jacob Andrae was one of the most influential Lutheran theologians of his time, and one of the most resolute opponents of the Anabaptists in the 16th century. As a general superintendent in Göppingen, Württemberg, he was very active in the work of the Reformation and had also much influence upon the sharp attitude of Duke Christoph toward all "sectarians" in Württemberg. Gustav Bossert, Jr., claims that it was most likely Andreae who incited the duke against the Anabaptists and gave him the idea that these sectarians "live like beasts without reason." Together with Johannes Brenz he took part in the great Anabaptist disputation at Pfeddersheim in the Palatinate in August 1557. The Quellen (148-161) contain a document, Contra Anabaptistarum opinionem, which seems to be a report of this colloquium drawn up most likely by Andreae and presented to the duke. It contains an elaborate refutation of 10 articles allegedly defended by the Anabaptists (Swiss or Hutterite). In November 1557 several leading Lutheran theologians convened at Worms on the Rhine to discuss the procedure of dealing uniformly with the Anabaptists. Melanchthon, Brenz, and Andreae were among those present. The result is a pamphlet entitled Prozess wie es soll gehalten werden mit den Wiedertäufern, durch etliche Gelehrten so zu Worms versammelt gestellt. The Stuttgart state archives has a document, Bedenken der Wiedertäufer halber, of the same year (Quellen, 161-168) that is identical with the Prozess; most likely Andreae had presented it also to the duke. The Prozess advocates the death penalty for Anabaptists according to Leviticus 24. The Bedenken has the same passage but crossed out. Bossert surmises that this was done by Brenz, and he adds characteristically, "Andreae pushed and Brenz put on the brakes." The Hutterites drew up a statement in their defense against the accusations of the Worms document, called Handbüchlein wider den Prozess der zu Worms am Rhein wider die Brüder so man die Hutterischen nennt ausgangen ist im 1557 Jahr, etc. It seems that this little book was printed, but no copy is known, save some handwritten ones.

In 1558 eventually Duke Christoph issued the long-expected mandate regulating the treatment of all sectarians (Anabaptists, Schwenckfeldians, Sacramentarians, etc.) in Württemberg. The text is published in Quellen, 168-171 (an original copy of the mandate is also in Mennonite Historical Library at Goshen College). Most likely Andreae was instrumental also in the drafting of this important document.

In 1562 Andreae was appointed provost of the great Stiftskirche, the cathedral of Tübingen, and he became also professor and chancellor of the university of this city. In 1567 he preached here a series of sermons on the principal divisions of the Christian religion, and in eight sermons subjected the views of the Anabaptists to a critical and unfriendly analysis. The sermons were published in Tübingen in 1568 under the title, Dreyundreissig Predigen von den fürnembsten Spaltungen in der Christlichen Religion, so sich zwischen den Bäbstischen, Lutherischen, Zwinglischen, Schwenckfeldern, und Wiederteufern halten (copy in the Mennonite Historical Library at Goshen College). A second edition appeared in 1573, another one in 1589. In these sermons Andreae gives vent to violent attacks against the Anabaptists, completely misinterpreting their idea of holiness of life (which is so foreign to Lutheran theology). It impresses one as very peculiar that a theologian of Andreae's rank could give his words emphasis in no other way than by ridiculing the simple appearance of an Anabaptist preacher and representing the earnestness of these brethren as hypocrisy and a deception of the devil. Andreae's sermons offer a good insight into the methods of attack and the hateful tone current among the prominent theologians of the time. This attitude is the more deplorable as Andreae was relatively well informed about the Anabaptists and their teaching. Many times he had come into personal contact with them, and he knew at least some of their literature. In his sermons he expressly quotes two books of Anabaptist origin, (a) Die Rechenschaft unserer Religion, Lehr und Glaubens, which is of course nothing other than Peter Riedemann's well-known Hutterite confession of faith, printed in 1565, and apparently in circulation also in Württemberg where Hutterites were active in missionary work, and (b) Heut und Gestern, which has recently been identified as Pilgram Marpeck's outstanding Testamentserläuterung of 1542-1544, also printed, though anonymously. Wiswedel reprints from Andreae's sermon the passage dealing with this book.

That Andreae could not grasp the intentions of the Anabaptists might be taken as indicative of the deep-rooted differences between Lutheran Protestantism, based on a rigid and rational theology (Andreae was instrumental also in the drafting of the Formula of Concord), and the Anabaptist vision based on the un-theological and rather existential idea of a committed discipleship.

Johann Valentin Andreae (1586-1654), a grandson of Jakob and an important churchman who insisted on purification of morals, is the author of the complaint, "He who now tries to live an upright life is called a fanatic, a Schwenckfelder, an Anabaptist."