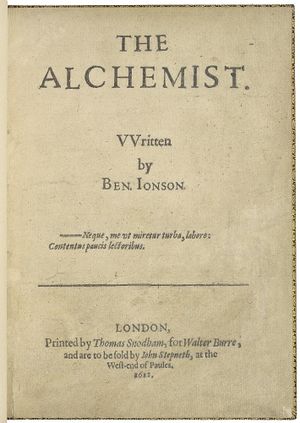 The Alchemist is a drama by the English playwright Ben Jonson (1572-1637) containing the first reference to Anabaptists or Mennonites in drama. The Alchemist is a comedic play in five acts. It premiered at Oxford in 1610, with performances in London later that year and was published in 1612. It is generally considered Jonson's best and most characteristic comedy and one of the few Renaissance plays, in addition to Shakespeare’s, still performed today.

The plot has a butler, Jeremy, a.k.a. Face, left in charge of a large house in Blackfriars, London. Without his master's knowledge he runs a major confidence swindle in company with two odd named characters: Sublte, a supposed alchemist, and Dol Common, a prostitute. All want the alchemist to perform some wizardly service but of course are tricked and cheated out of their money and goods. Those deceived include Ananias, an Anabaptist Deacon from Amsterdam, and also later his pastor with the Puritan like name, Tribulation Wholesome. The Anabaptists want the Philosopher’s Stone to convert goods into gold in order to use this money to win more people to their denomination.

In The Alchemist the terms “Mennonite” and “Anabaptist” are not used though the two characters are identified as Anabaptists in the preface listing of the play’s characters. The Anabaptists in the play call themselves “separated Brethren” and Sublte (act II, scene v) calls Ananias “You heathen, you Knipper-Doling.” A direct reference to Bernard Knipperdolling (1490-1536) the martyred Anabaptist Mayor of the city of Münster. Then near the play’s end the returned master of the Blackfriars house in error accuses a character of also being an Anabaptist when he shouts at him (act V, scene v), “Away you Harry Nickolas” an apparent reference to the supposed Anabaptist Hendrik Niclaes (1502-1580) the leader of the “Family of Love” sect suppressed by Queen Elizabeth in 1580.

The English only knew distorted and historically inaccurate Anabaptist characteristics, practices and beliefs for the information that came to them were texts from their enemies. For example they knew them as revolutionary fanatics of the German City of Münster. The Anabaptist character Ananias is depicted as greedy for power and property, though passionate to increase his churches membership. Likely the playwright Jonson uses Anabaptists as a device to ridicule Puritans and other controversial religious figures in his troubled religious times.