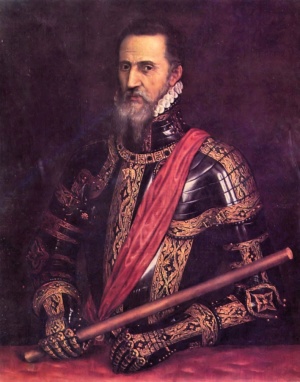 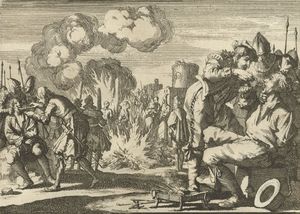 Atrocities under the Duke of Alva in the Netherlands.
Engraving by Jan Luiken in Martyrs Mirror, v. 2 of Dutch edition.
Source: Rijksmuseum.

Fernando Álvarez de Toledo y Pimentel, 3rd Duke of Alba (Alva): leader of the Spanish troops under Emperor Charles V in the battle of Mühlberg in 1547, and later under the son of Charles, Philip II, was Spanish viceroy in the Netherlands from 1567 to 1573; born 29 October 1507 and died 11 December 1582.

Alba ruthlessly attempted to suppress the Protestant movement in the Netherlands. The Inquisition introduced into the Netherlands by his predecessor, Margaret of Parma, took thousands to execution at the stake and the scaffold. He instituted a tribunal for the suppression of heresy, popularly called the "Council of Blood," to wipe out not only those suspected of Protestant leanings, but also those who were dissatisfied with his measures. Counts Egmont and Hoorn were executed in 1568.

Thousands of the most highly respected families in Flanders tried to escape Alba by flight. Among these were many Mennonites, some of whom fled to the northern province of Holland and sought refuge there with fellow church members. Because of their origin they were later called Flemish, at first to distinguish them from and later to contrast them with the Waterlanders and Frisians, and for over two hundred years constituted a separate branch of Mennonites, although many joined them who were not geographically Flemish in origin. Others fled via Emden to Germany, many of whom settled in Hamburg. In spite of all his cruelty and hardness—more than 18,000 are said to have been executed by Alba— he did not succeed in suppressing the unrest. On the contrary, under the direction of William of Orange the States-General declared themselves independent, took up arms against the Spanish tyrants in 1568, and won their political independence.