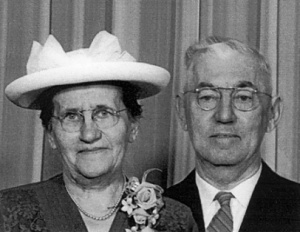 John studied in the Halbstadt Zentralschule, specializing in pedagogy. On earning his teaching certification, he began teaching in the village of Blumstein in 1918. In 1924, in the light of internal political, social and economic disruptions in Russia, the Adrian family moved to Canada, settling in Manitoba. After English studies at the Mennonite Collegiate Institute in Gretna and several months of studies at the Manitoba Teachers College in Winnipeg, John and his family settled in the village of Rosenort in 1927, taking up his duties as village teacher. A few years later he accepted a teaching position in the village of Reinfeld where he taught and ministered effectively for the next fifteen years (1931-46). The Sommerfelder parents regarded him highly as he taught their children not only the “3 Rs” but also Bible and ethics.

Adrian exemplified an enterprising teacher in Reinfeld. He taught a large class of students, from grades one to eight, for a number of years, and also taught Sunday School on Sunday (including students from ages 10 to 60). He ministered to all members of the village of about 30 families. He organized youth meetings in winter, brought students from the Winkler Bible School to have programs on some Sunday evenings, and directed an adult choir. Occasionally he invited a medical doctor to give lectures on good healthy food preparations for the women, and gave lectures with materials from the Morden Experimental Farm and the University of Manitoba to the men of the village. A most notable event was his invitation of I. P. Friesen from Saskatchewan to give a series of sermons in the school in Reinfeld. A spiritual renewal emerged. The school could not hold the attendees after two weeks. The meetings moved to the neighboring town of Winkler, eventually to the largest church building, the Mennonite Brethren church. A new denomination emerged, the Rudnerweide Church, later called the Evangelical Mennonite Mission Conference (EMMC), in 1937.

In 1946 Adrian moved to Yarrow, British Columbia to become principal and teacher at the Bethel Bible Institute in Abbotsford. His students found him to be a man of great integrity. His teaching was crisp and clear. He had the gift of making the difficult easy, rather than vice versa. His personal care for each student was exemplary. After three years he accepted a call to teach at the Mennonite Collegiate Institute in Gretna, Manitoba in 1949. A few years later, in 1951, he accepted a teaching position at the Canadian Mennonite Bible College in Winnipeg, where he taught hermeneutics and homiletics for the next ten years. In 1964 he and his wife Katherina retired to Abbotsford, British Columbia, where they joined the Eben-Ezer Mennonite Church. He participated actively in the ministry until failing health no longer made it possible. He spent his last years at the Sherwood Manor.