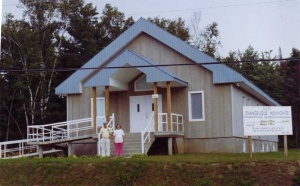 Beginning in the 1950s, Mel and Ellen Schmidt, who worked at the Rock of Ages Camp near Chertsey, had been traveling 50 km to Église évangelique de Joliette to worship and eventually became members there. Over the years other families from Rawdon began attending as well. Transportation was a problem and as numbers grew the Joliette building became inadequate.

In 1976 David Shantz, pastor in Joliette, and André Joly began Bible studies in Rawdon, assisted by Daniel Milton and John Docherty. In 1980 Sunday evening services began in the Rawdon United Church. This rental continued until a new Mennonite building was completed in September 1991 with substantial construction help from Mennonites from Joliette, Montreal, Vermont and all over Ontario. The Église évangélique mennonite de Rawdon was officially organized and recognized as a congregation separate from Joliette in 1982 within Mennonite Conference of Eastern Canada. The congregation grew to about 45 during the pastorate of David Shantz.

Various conflicts and part-time pastorates from 1991 till the present time have left a small congregation in a large building. There were periods when there was no pastor.  At these times, members of the church led the mid-week meetings and guest pastors/speakers from Montreal and elsewhere brought messages during the worship service on Sunday mornings. Throughout evangelism has remained a major emphasis with support from the Conseil Mennonite du Québec. The church offered a door-to-door outreach ministry, services in three seniors residences, bi-monthly coffee houses at which films were shown, a program led by a musical group, guest speakers, and many fellowship meals.

In 2006, a resident pastorate for Église évangelique mennonite de Rawdon was restarted, sharing a pastor with Joliette.

The congregation held its final service on 5 June 2011 after active membership had declined to five elderly members.

The language of worship was French although there had always been English members.