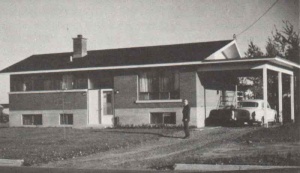 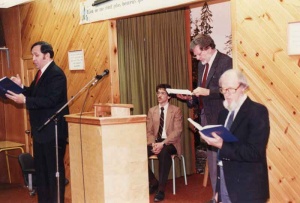 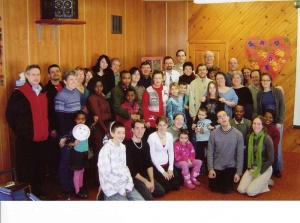 The Église évangelique mennonite de Joliette began services in 1958, and formally organized in 1974. Harold and Pauline Reesor were the founding missionaries for the group, choosing this small industrial town, 70 km northeast of Montreal, because it had no French Protestant congregation at the time. Previous French United Church work had been abandoned. This mission venture originated through the Mennonite Conference of Ontario and the Mennonite Board of Mission (Elkhart).

In the pre-Vatican II days, Joliette was very heavily guided by the many priests, nuns and monks resident in town. Opposition from church and municipal authorities made for slow discouraging work. The Reesors met together with fellow missionaries Tilman and Janet Martin, along with the Schmidt family from Rawdon for fellowship and worship in French. Harold Reesor visited many homes as follow-up for an evangelical effort to mail French Protestant material to every household in Quebec. In 1961 Melvin and Leeta Horst and family from St. Jacob's congregation arrived near Joliette as part of "colonization" efforts to farm and support other missionaries. Harold Reesor built his house with a large basement, at 1419 rue Piette, which functioned as the church building from 1962 until 1982. In 1963, the Reesors handed over the responsibilities for the congregation to Clyde and Elisabeth Shannon, moving themselves to farm nearby Mascouche.

Over the years many volunteers came from Ontario and particularly the Markham area to offer practical help. Very few could speak French to help more directly. The Shannons with previous experience as missionaries in the Congo and in St. Jerome, Quebec, pressed on in evangelism and hospital visits despite continued very slow progress. The first baptism came in 1969. Only in the late 1970s did a province-wide revival touch Joliette and bring in many youth.

A church council was begun in 1974 and several younger members, including a local radio announcer began leadership. Rapid growth in the late 1970s led to gradual splitting off the members from nearby Rawdon for their own church and the  buying of the present larger church building in Joliette in 1982. Since 1982, the congregation has had native French-speaking Quebecers in leadership but from 1994 to 2005 there was no resident pastor. In that time the French membership dipped only to be replaced more recently by new immigrants.

Joliette is generally considered the most Anabaptist of the French Mennonite or Mennonite Brethren congregations in Quebec and is also strongly evangelical. Over the years the congregation has been quite involved with prison ministries leading to and encouraged by full-time chaplaincy positions for members Tilman Martin and David Shantz. In the late 1990s a strong music and youth program led to opportunities to work with local Roman Catholic leaders and pioneer links between evangelicals and Catholics. In 2007 an independent Spanish congregation began meeting in the same building.

The language of worship is French. For several years the pastor was shared with the Église évangélique menonite de Rawdon). After 2011 there was no pastor. The congregation did not meet officially for a number of years, and was declared closed at the Mennonite Church Eastern Canada annual meeting in April 2020.