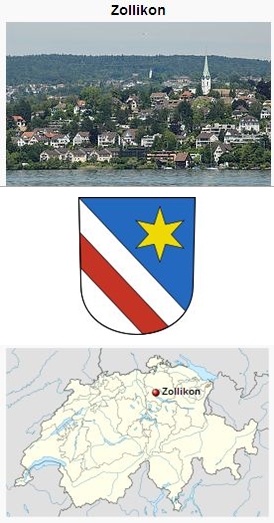 Zollikon, a village at the southern edge of Zürich, Switzerland (coordinates: 47.333333, 8.583333 [47° 20′ 0″ N, 8° 35′ 0″ E]), the seat of the first Anabaptist congregation, which was in existence eight months, from the end of January to August 1525. It was the only Anabaptist congregation ever established in or in the immediate vicinity of the city of Zürich. The village inhabitants included at this time, as Bruppacher has shown, about 50 large farm owners and 40 small farm owners. Most of the Anabaptists belonged to the latter class, and some 30 of the 40 joined the movement. According to Blanke, from 22-29 January beginning the day after the founding of the Anabaptist brotherhood in the evening meeting in the home of Felix Manz in Zürich on 21 January the day on which the Zürich council proscribed Anabaptism, a total of 35 persons are known to have been baptized, 34 men and one woman, 30 of them independent peasants, and four hired hands. They belonged to such old Zollikon families as Breittiner, Bleuler, Hottinger, Kienast, Murer, Rutschmann, and Thomann. The Hottingers were the most numerous in the group. Chief among them, apparently the leader, was Jakob Hottinger, the only one who persisted in his Anabaptism beyond 1527, and who was put in prison as late as April 1528 because he did not attend the regular church services but arranged special meetings. Other names among the Zollikon members were Unholz, Schuhmucher, and Schad. Three earlier influential members of the Zollikon "Brethren in Christ," as they called themselves (Heini Hottinger, Felix Kienast, and Hans Murer), were among the soldiers in the army of Zürich who died on the field of battle at Cappel in October 1531.

Fritz Blanke's brilliant account of the Zollikon Anabaptists based wholly on the sources as published in the Zürich Täuferakten edited by von Muralt and Schmid in 1952 makes it clear (1) that the Zollikon Anabaptist congregation was the result of a genuine religious revival, in which conviction of sin, repentance, and faith in Christ as Saviour were the carrying experiences; (2) that the revival in Zollikon followed directly on the great night service of 21 January the birthday of Anabaptism, where Grebel and Blaurock baptized 15 persons; (3) that Johannes Brötli, a former Catholic priest, who had joined Zwingli's reformatory movement in the summer of 1523 and was living in Zollikon without a church position, was the first one to baptize a Zollikon inhabitant, and thus in a sense the establisher and first leader of the congregation there; (4) that Conrad Grebel led the first communion service on Sunday or Monday, 22 or 23 January in Jakob Hottinger's home, but thereafter had no further connection with Zollikon but started his missionary career in another direction (Schaffhausen); (5) that Felix Manz and Georg Blaurock were active in Zollikon for a time in the early weeks and performed baptisms; (6) that repeated arrests and harrying of the members of the Zollikon brotherhood finally broke their will to establish an independent free church and prevented the establishment of a full Anabaptist congregation as occurred elsewhere in Switzerland and South Germany.

Johannes Brötli, the first leader, was expelled from the canton of Zürich on 29 January 1525. On the next day, Manz and Blaurock were arrested with 25 local men, the former imprisoned in the Wellenberg prison tower, the latter in the former Augustinian monastery, where they were kept for eight days. Here the three city pastors, Zwingli, Jud, and Megander, after lengthy discussions, succeeded in securing a compromise whereby the Brethren would be allowed to meet in small groups for Bible reading and study, but would leave the preaching and baptism to the regular city preachers, A letter from Brötli (then at Hallau) to the Zollikon group, after he had heard of the compromise, appealing for steadfastness, has been preserved; in fact the Brethren soon regained their footing and abandoned the compromise.

When Blaurock was released from prison at the end of February 1525, he appeared in Zollikon, held several evangelistic services on 26 Febuary and baptized 10 persons, two men and eight women. On 12 March Georg Schad, a peasant, baptized 40 persons in the Zollikon village church. On 8-15 March some 80 more were baptized, 30 by Hans Bichter, seven by Jacob Hottinger, Jr., two by Hans Huiuff, and one each by Hans Oggenfus and Valentes Gredig; others not listed. Three fourths of the baptized were not residents of Zollikon, but were mostly from the neighboring villages of Küssnacht and Höngg. At the Bible meetings preaching was added, and at each service a communion was held. Meetings were held at five different places in homes, and in groups larger than the limit of four imposed by the earlier compromise. Discipline was practiced through the ban. As Blanke says, "Since they had preaching, baptism, communion, and discipline, they had the four marks necessary for a full independent Christian congregation."

The Zürich council now called to account those Zollikoners who had broken their pledge of February. All those who had presumably baptized, 19 men, practically all the leading Anabaptist personalities of Zürich and Zollikon, were imprisoned on 16 March 1525, in the Augustinian monastery for nine days, during which they were questioned and Zwingli endeavored to reconvert them one by one in separate cells. The pressure was too great; all but four of the prisoners yielded to Zwingli and promised "to desist from rebaptizing and not to speak or act against infant baptism." Blanke comments that this was in effect the breaking of the Anabaptist movement among the peasants of Zollikon. Only a few individuals remained steadfast.

An unusual incident occurred in June 1525, when a procession of men, women, and children of Zollikon marched through Zürich's streets and squares shouting that Zwingli was the dragon prophesied in Revelation 12:3, and calling upon the inhabitants of the city to repent, lest a terrible catastrophe befall them. No doubt some of the members of the former Anabaptist group were in the procession, but clearly none of the leaders took part, since no arrests were made, and when later arrests were made no charges or questions about the procession were ever raised. The forcible suppression of Anabaptism no doubt contributed to the explosion. But such action and the corresponding ideas were not at all characteristic of Zürich and Zollikon Anabaptism, Blanke points out, referring to the fact that of the two dozen extant letters from the Anabaptist circle in 1524-25 only two have any eschatological references, and these are letters of Conrad Grebel. The Anabaptist message, he says, was polarized around the themes of sin and forgiveness, not the end of the world; the documents tell of concerns for the preaching of the true Biblical message, the building of the true church, of baptism, of steadfastness under trial, of defense against false accusations.

There is evidence that the suppressed Anabaptists of Zollikon continued to hold their Bible study meetings after March 1525, although they did not baptize anyone, and they probably did not attend the state church services. In July the Zollikon group sent three Bible readers (Rudolf Rutschmann, Rutsch Hottinger, and Felix Kienast) to nearby Nänikon and Wassberg, in response to requests from these villages, to lead Bible study meetings. As a result, in August the Zürich council issued an order to Jacob Hottinger forbidding the Bible meetings that they had earlier authorized in February. Then the Anabaptist group (thirty in number) met in Heini Hottinger's home and decided "to give up baptizing, simply to live together in a Christian way, and to be obedient to the authorities." This meant, says Blanke, the final burial of the plan to establish a permanent free church in Zollikon and the agreement to give up the congregational Bible meetings and to attend the state church services, whatever the private convictions of the individuals may have been.

The last flicker of Anabaptist spirit in Zollikon manifested itself in June 1527 and proved that there still were private convictions under the surface. Five Zollikoners, Jacob, Uli, and Heini Hottinger, Jakob Unholz, and Felix Kienast, visited two Anabaptists held in prison in Grüningen — Jakob Falk and Heini Reimann, who were facing a possible death sentence. The visitors comforted the prospective martyrs and urged them to stand faithful to the truth to the end.

Jakob Hottinger's statement to his inquisitors in August 1525 is characteristic of the position of the Zollikon Anabaptists. "The state has no power over God's word; God's word is free." He appealed to the Zürich council not to compel attendance at the state church services, but to permit the practice of the Christian faith outside the state church apparatus. He demanded freedom of conscience and freedom of church building. This appeal lies at the very heart of the Anabaptist position. Zollikon was the first place in Protestant history where the establishment of a free and voluntary church was attempted. The attempt failed; it was ahead of the time.