Yugoslavia (literally in English: "South Slavia" or "Land of South Slavs") is a term that describes a nation that existed on the Balkan Peninsula in Europe during most of the 20th century. The first country to be known by this name was the Kingdom of Yugoslavia, which before 1929 was known as the Kingdom of Serbs, Croats and Slovenes, established on 1 December 1918. The second country with this name was proclaimed in 1943 by the Yugoslav Partisans resistance movement in World War II, led by Josip Broz Tito, and became known as the Federal People's Republic of Yugoslavia in 1946, when a communist government was established. In 1963, it was renamed again to the Socialist Federal Republic of Yugoslavia (SFRY), composed of Bosnia and Herzegovina, Croatia, Macedonia, Montenegro, Serbia (including the autonomous provinces of Vojvodina and Kosovo) and Slovenia. 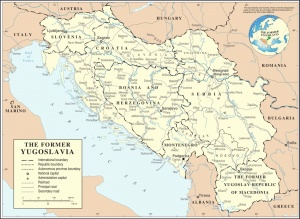 In 1981 Yugoslavia was composed of the following ethnic groups: Serbs (36.3%), Croats (19.7%), Muslims (8.9%), Slovenes (7.8%), Albanians (7.7%), Macedonians (6.0%), Yugoslavs (mostly Serbs, 5.4%), Montenegrins (2.6%), Hungarians (1.9%), and various other groups (3.8%). Traditional religion reinforced ethnic separatism; only the Protestant minority (less than one percent) bridged among numerous ethnic groups. Mennonite involvement began with earthquake relief in Skopje, Macedonia (1963), and contacts with the indigenous Nazarene movement. In the 1970s Eastern Mennonite Board of Missions and Charities (MC) and later Mennonite Central Committee began supporting volunteers for university studies and fraternal relations with other Protestants in the free-church tradition, notably in cooperation with the Biblical Theological Institute of Zagreb (1987-    ).

After the wars of the 1990s, MCC aided some of the millions of people who were displaced and later resettled. MCC worked with Bread of Life during these years to help feed and clothe refugees. After the war, MCC continued to support Bread of Life as they worked with people with mental and physical disabilities, the sick and the elderly in Serbia, and provided interest-free loans to displaced families in Bosnia and Herzegovina. The Center for Interreligious Dialogue and the Center for Nonviolent Action, both based in Belgrade, received grants from MCC in 2004, and MCC workers served at Novi Sad Theological College. In Croatia, MCC supports the work of Duhovna Stvarnost, an organization that has partnered with an Orthodox organization to assist families which fled during the war years.

Alexander, Stella. Church and State in Yugoslavia since 1945. Cambridge: Cambridge U. Press, 1979.

Shenk, N. Gerald. How Should Christians Respond to Communism?" What about the Russians? A Christian Approach to US-Soviet Conflict. Editor: Dale W. Brown. Elgin, IL: The Brethren Press, 1984.