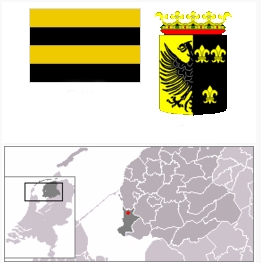 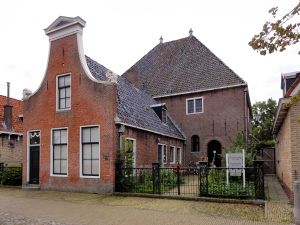 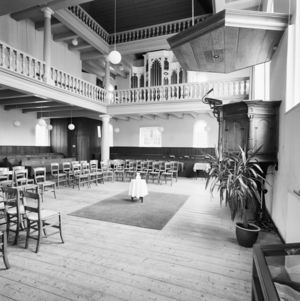 Workum, a town in the Dutch province of Friesland (1953 population, 4,080, with 190 Mennonites; 2004 population, 4,162), with a Mennonite congregation (coordinates: 52° 58' 39" N, 5° 26' 42" E). The year of the origin of this congregation is unknown, but Anabaptists were found here at an early date. The martyr Claesken Gaeledochter was baptized "near Workum in the fields" in 1549. Both she and her husband Hendrik Eeuwesz were executed at Leeuwarden in 1559. Leenaert Bouwens baptized 23 per­sons at Workum in 1551-54, one in 1557, and 25 in 1563-65. In 1574 Hendrik Pruyt died at the hands of Spanish soldiers. At this time or shortly after, the Mennonites must have been rather numer­ous at Workum and soon they were leading in trade and shipping, then an important means of livelihood in this town. In 1578 when the town was liberated from the Spanish yoke, a Mennonite, Hemme Haucx (b. 1503), became a burgomaster of Wor­kum, and three other Mennonites were in the town council; they were exempted from the oath. But as early as 1600 Calvinism became predominant at Workum, which was somewhat intolerant toward Mennonitism. In 1605 the Reformed pastor Johan­nes Bilt sharply attacked the Mennonites, and in 1608 the remodeling of the meetinghouse was for­bidden. But soon relations between the magistrates and the Mennonites seem to have improved; no fur­ther trouble occurred.

There is some unclear information that there were three congregations at Workum ca. 1580, one High German, one Frisian, and one Waterlander, but only of the Waterlander church is there anything definite­ly known. This congregation, which in 1647 was represented at the Waterlander conference at Am­sterdam, was divided by a schism, probably before 1600. A more conservative part of the congregation separated from the main, rather progressive body. This conservative group may have assumed the name of Frisian or High German. Each group had a meetinghouse; the progressives met at de Keet, a former salt works located on the site of the present meetinghouse, whereas the conservatives met in a private home, not far from de Keet. It is not known when and how this division ended, but the conservative group had disappeared at least by 1620. The preacher of the Keet congregation was a certain Eenke from about 1580; his son Rippert Eenkes was a preacher from ca. 1600 and soon after an elder, serving until after 1627. He was an influen­tial Waterlander leader, who conducted services in a number of congregations as far away as Amsterdam, Haarlem, and Emden, and even in Danzig in Prus­sia. But in his home church his advanced ideas evoked much opposition and in 1618 he was sus­pended on a charge of misconduct, which was used to eliminate the powerful elder, beloved by many but undesirable for more. Many conferences were held to restore peace; in the meantime it became clear that the charge was false. Finally the Water­lander leader Hans de Ries, who visited Wor­kum more than once, succeeded in 1620 in settling the dissensions. After the death of Eenkes the con­gregation continued until 1738 to choose their min­isters from their own members. Usually there were three or four preachers, whereas baptism and com­munion services were led by elders from elsewhere.

In 1695 the Workum congregation was one of the founders of the Mennonite conference of Friesland (FDS). The ties with the Waterlanders in North Holland, which had been very strong in the early 17th century, were loosened. Workum was always a loyal and even leading member in the FDS, except in 1817, when it withdrew for a few months because it was dissatisfied with the subsidy policy of the con­ference, Workum also played an important role in the Zuiderklasse.

At the close of the 18th century peace was greatly disturbed in the Workum church by differing politi­cal views. Whereas the deacon Ruurd Wopkes sided with the Orangists (political party favoring the Prince of Orange and the established political or­der), many members, e.g., the merchant Jan Douwes de Hoop and particularly the pastor Sybren Hofstra, were Patriots; abandoning the prin­ciple of nonbearing of arms, they together with the non-Mennonite citizens organized a voluntary mili­tia in 1785, and in 1787 tried (but in vain) to take possession of the city government. Thereupon Jan de Hoop's home was plundered and pastor Hofstra was suspended from his office 1787-95 by the city magistrates. In 1797 peace, both political and con­gregational, was restored. By the Napoleonic occupation and the financial measures of Napoleon the Mennonite congregation of Workum, formerly rather well-to-do, was greatly impoverished. The considerable legacy willed to the church by Simen Durk Hinlopen in 1795 was nearly all claimed as a compulsory state loan; in 1811 there were no funds to pay the pastor's salary. The financial situation was improved after 1815 by the generous gifts of its treasurer, J. J. Stelwagen, and a regular subsidy from the Algemeene Doopsgezinde Sociëteit from 1818.

Church activities in 1959 were: ladies' circle, youth group 18-25, and a Sunday school for children.