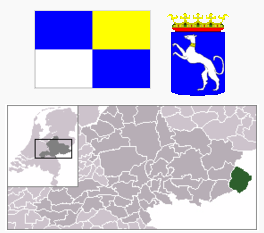 Winterswijk, a town in the Dutch province of Gelderland (pop. ca. 23,000 with ca. 120 Mennonites in 1959, 29,231 in 2007; coordinates: 51° 58′ 0″ N, 6° 43′ 0″ E), seat of a Mennonite congregation, concerning whose origin there is no exact information. F. C. Fleischer sug­gests that Mennonites living at Winterswijk and sur­roundings because of persecution crossed the border to adjacent Westphalia, Germany, as early as 1543, and settled in Bocholt and other Westphalian towns until they were expelled by a mandate of the bishop of Münster ca. 1610. Then some Mennonites, including the Waliën and Willink fam­ilies, settled in Winterswijk. A note in the old Winterswijk church book says that Mennonite meetings started in 1611 in the home of Hindrick Waliën at Winterswijk. At least in 1638 there was a Mennonite congregation here, whose membership until the mid­dle of the 19th century was very small, seldom surpassing 30 members. This congregation in the 17th and 18th centuries was called Waterlander, which means simply that it was rather liberal. Whether there was also a second (Flemish?) church at Win­terswijk is questionable. A meetinghouse, still in use, was built in 1711 after meetings had been held for a century in the Walien home.

Mennonite families found at Winterswijk in the 18th century were ten Broeke, ten Cate, Coenders, Coster, Dekkers, Eppenhof(f), Hoedemaker, Hofkes, Nieuwenhuys, Waliën (Walyen), Wenkelaar, and Willink, soon after also van Lochem and Paschen. Nearly all these families died out or moved elsewhere in the 19th century or earlier, only the Paschen and Willink families being found here until recent times. Most members of the Winterswijk con­gregation, nearly all engaged in business and manu­facturing, particularly textiles, iron, and brickyards, were well-to-do in the 18th century. In 1733 and 1736 they contributed 150 and 95 guilders for relief of the Prussian Mennonites.

Until 1786 the deacons, sometimes called directors, always two, were chosen from the married men. After 1786 unmarried men were also eligible. From 1825 until ca. 1920 there was usually only one deacon, who served for many years. Church activities now (1958) are a ladies' circle and a Sunday school for children.