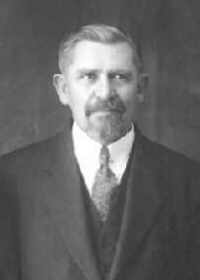 Johann received his elementary and secondary education in his home community and attended the Baptist Seminary at Hamburg, Germany from 1899-1903. He was baptized in June 1900. Johann and Helene served a term as missionaries in India from 1904-10. In 1918 Wiens was the leader and teacher of the Tchongrav Bible School in the Crimea, positions he held until 1924.

Wiens immigrated to Canada in 1926 where he taught at the Winkler Bible School, operated a garage in Winkler together with his son, and preached throughout the Mennonite Brethren constituency in Canada and the U.S. when the school was not in session.

The personal papers of Johann G. Wiens are with his nephew, Harold A. Wiens, in Winnipeg, MB.