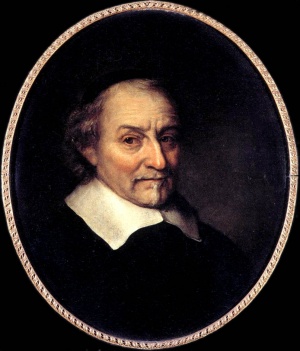 Joost van den Vondel, born 17 November 1587 at Cologne, Germany, died 5 February 1679 at Amsterdam, Nether­lands, the son of Joost van den Vondel of Antwerp and Sara Cranen (Kraen), operated a silk business at Amsterdam, at first with his mother, then independently until this business failed. In his old age he was a clerk in the city pawnshop of Amsterdam. In 1610 he married Maeyken de Wolff; they had four children, Joost (b. 1612), Anna (1613-1672), Constantijn, and Saartje (the last two died at an early age). In 1641 Joost Jr. joined the Catholic Church with his father, and Anna also became a Catholic.

Joost van den Vondel is the greatest Dutch poet. His literary works, among which were a number of Biblical and historical plays in verse, are among the treasures of the Dutch literature.

Like his parents he was a Mennonite. He, how­ever, did not join the Flemish church as they did, but the Waterlander congregation of Amsterdam. It is not clear why he preferred this branch of Men­nonites, but it was probably because the Waterlanders were more open to culture and the arts than the Flemish. In 1616 he was chosen (by lot) as a dea­con of the Amsterdam Waterlander congregation, serving until 1620, in this year taking leave because of "great unfitness because of his depression," as is said in the Memoriael by the Waterlander preacher Reynier Wybrands. It is not clear what this meant. Probably he was ill, suffering a depression of spirits; but it is also possible that the church did not ap­prove of his connections with the literary clubs of that time (Rederijers) or his Remonstrant leanings. In 1624 he wrote a sonnet for Anthoni Jacobsz Roscius, a Waterlander preacher of Hoorn, who had suffered a tragic death. In 1626 during a conflict in the Amsterdam Waterlander congregation between Nittert Obbes and the other preachers of the church Vondel took the side of Obbes in his poem Antidotum, Tegen het vergijt der Geestdryvers, Tot verdedigingh van't beschreven woord Gods. About 1638 he composed the familiar laudatory inscription to Rembrandt's etching of Preacher Cornelis Claesz Anslo. But after 1620 he had no special connections with the congre­gation and was gradually estranged from it.

About 1641 he joined the Roman Catholic Church. The reason for this step is still a matter of discussion. A number of reasons may have cooperated in induc­ing him to this step. Among these reasons there certainly were a feeling of discomfort in the "divid­ed church" and a longing for the unity of all Chris­tians, the sparse furnishings of the Mennonite meetinghouses, and their sober worship services. Other factors were the influence of ecumenists like Hugo de Groot, and particularly of Catholic friends such as Plemp, and finally the propaganda of the Jesuits at Amsterdam, who in this period made a large number of converts including some Mennonites.

As there is no agreement as to the year in which Vondel actually joined the Catholic Church (Catho­lic authors usually assume it to have been 1639, but it was probably not until 1641), there is no agree­ment as to Vondel's Catholic mentality. Whereas Brom boldly claims that even as a Mennonite Von­del was "as Roman Catholic as an altar," Smit says, "His Mennonite conviction during his whole life remains the kernel of his religious attitude. Much that has been called pure Catholic in him is basically pure Mennonite. His famous tragedies show strong Mennonite characteristics." It is, according to Smit, notably the Waterlander piety which was continued, and which can be clearly shown in his later tragedies.

After Vondel had left the Mennonite Church he remained in contact with a number of them. For some Mennonite couples he composed nuptial hymns (this, however, was mostly hack work). Laudatory poems, nuptial poems, and poems of mourning were written by Vondel for members of the following Mennonite families: Anslo, Block, de Flines, Linnich, de Wolff, Leeuw, Looten, de Neufville, van Tongerlo(o), and de Vries. Among his Mennonite friends until his death were the Blocks, and especially Agnes Block, who was married first to Vondel's relative Joan de Wolff and then to Sybrand de Flines, both members of the Mennonite church. She visited him regularly, she contributed to his material needs, she comforted him in the lone­liness of his old age; on a last visit shortly before his death, she spoke with him on death and eternity.

There are a number of editions of Vondel's liter­ary works. At first the tragedies and other works were printed separately and some poems even on loose sheets. The last edition of his complete writ­ings is an edition in ten volumes with an index, published at Amsterdam 1927-1937.