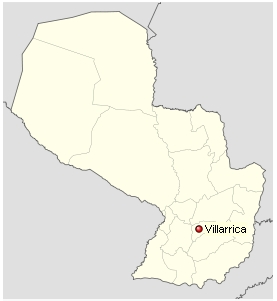 Villarrica, a Paraguayan town some 120 miles south­east of Asunción (coordinates: 25° 45′ 0″ S, 56° 25′ 0″ W), in the area of which Old Colony Mennonites settled in 1948, who like the first Men­nonite settlers in Paraguay, i.e., the Menno Colony in the Gran Chaco founded in 1926, also came from Canada. The group at Villarrica numbered 1,644; 740 came from the East Reserve on the Red River in southern Manitoba, 764 came from the West Reserve on the same river, while another 140 came from Saskatchewan. The East Reserve group purchased 27,500 acres, largely of primitive forest land, about 65 miles east of Villarica, and settled in 7 villages with Chortitz as the administrative, trade, and in­dustrial center. The remainder of the group of im­migrants founded the colony of Sommerfeld some 15 miles from Bergthal, settling on 85,000 acres of forest land which they purchased at about $3.00 per acre. Here nine villages were built; one of these, also named Sommerfeld, became the trade, indus­trial, and administrative center.

All the settlers of both these colonies, like the earlier immigrants from Canada, came to Paraguay hoping that it would here be easier for them to pre­serve their spiritual heritage, the German language (though in everyday life only Plattdeutsch is spo­ken), and their traditional, rural way of life. All of these they thought were threatened in Canada, with the young people leaving the farms for the city, availing themselves of higher education, and in many instances joining the military forces. The vil­lage life, church, and school in the new homeland were arranged according to the traditionally con­servative pattern of their forefathers as these settled in Russia in the 1780s and again in Canada in the 1870s. Colony affairs are voted upon by the group, the ministers are elected from the ranks of the lay­men, and teachers for the schools are also laymen able and willing to teach the "three R's." No higher education is provided for, and men rely on reading the Bible which also serves as textbook at school, periodicals—mostly religious journals edited by sis­ter denominations—or farm journals, or the radio for widening their horizons. However, the making of a livelihood in the new homeland calls for consider­ able adapting. The once proud wheat farmers and "mixed" farmers of the Russian steppes and the Canadian prairies are here truck farmers, gardeners, raising kaffir corn, maize, peanuts, mandioca, and citrus fruits; they become "rancheros" raising the scrub but hardy cattle adapted to the tropics; or they cut, dress, and sell what useful timbers can be found in their forests, mostly lapacho and cedar. Or, lacking the means to start on their own, they are re­duced to cowhands and wage earners. Paraguayan conditions, lacking markets and marketing facilities as well as natural resources, do not provide opportu­nities for much diversification and expansion, nor are economic and political conditions stable enough to encourage it. For this reason about one third of the immigrants that came in 1948 returned to Canada.