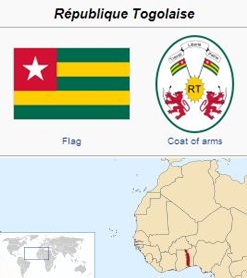 Various tribes entered what is now Togo between the 11th and 16th centuries. From the 16th century to the 18th century, the coastal region was a major trading center for Europeans in search of slaves, earning Togo and the surrounding region the name "The Slave Coast." In 1884, Germany declared Togoland a protectorate. After World War I, rule over Togo was transferred to France. Togo gained its independence from France on 27 April 1960. In 1967, Gnassingbé Eyadéma led a successful military coup, after which he became president of Togo until his death in 2005.

In Togo, there are about 40 different ethnic groups, the most numerous of which are the Ewe, Kotokoli, Tchamba, Kabyé, and Uaci or Ouatchis. Approximately 51% of the population has indigenous beliefs, 29% is Christian, and 20% Muslim.

The Mennonite Church in Togo

"Background Material on Mennonite, Brethren in Christ and Related Churches in Africa and the Countries where they are Found." 2001? Web. 16 April 2011. http://www.mwc-cmm.org/MWC/Material/WFSbackground.pdf.