From GAMEO
Revision as of 13:34, 10 December 2018 by AlfRedekopp (talk | contribs) (→‎Bibliography)
(diff) ← Older revision | Latest revision (diff) | Newer revision → (diff)
Jump to navigation Jump to search
A checked version of this page, approved on 10 December 2018, was based on this revision. 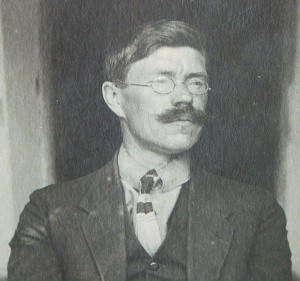 Jacob and his siblings were educated at home. Like many other estates they were isolated and far from village schools, so the owners had to hire tutors. The Sudermann estate elementary school was granted official status by the Government in the early 1900s.

In 1901, Jacob attended high school in the village of Chortitza. He later attended school in Ekaterinoslav, home to a large Mennonite community. The Ekaterinoslav Mennonite congregation supported a German school with a Mennonite teacher, David H. Epp, who was also their church minister. Mennonite youth who came to school in the city often boarded with Mennonite families. They attended church and received pre-baptismal tutoring.

During the fall of 1907 Jacob attended the University of Basel, Switzerland, for the first semester. He studied courses in Philosophy, The Romantic Movement, Shakespeare, George Bernard Shaw’s play "Candida," the works of Flemish Baroque painter Peter Paul Rubens, and the Dutch Master Painter Rembrandt.

In 1911, Jacob and his sister Anna attended the University in St. Petersburg. Jacob studied Mathematics and Physics. Jacob had intentions of becoming an Architect. At an early age Jacob liked to draw and paint. He would wander through St. Petersburg and marvel at the architectural style of buildings. This interest can be observed in some of Jacob’s paintings. He enjoyed painting estate houses with their elegant rooms and landscaped gardens. Jacob was also interested in photography. His photographs of the Chortitza church were later featured in many publications.

The social climate of that era made him reconsider an architectural career. After the revolution, things had changed. Jacob decided there might not be work for an architect in the new era of a socialist society. He might be better off taking more practical courses. Jacob decided to pursue teaching as a second career choice. This was good because after the social upheaval caused by the First World War and the Russian revolution; Jacob was able to find work as a teacher.

Jacob and Anna studied at the St Petersburg University for three years until the fall of 1914 when World War I started. Jacob lost his desire to continue studying and decided to pursue a teaching job at the Chortitza Zentralschule. Jacob’s teaching position was put on hold as he worked in the war office in Moscow for the next three years. During the famine of 1921-1922, Sudermann worked with American Mennonite Relief in Zaporozhe. After the communist government took control of education, they created a teachers college called Paedtechnikum. Jacob was a teacher at the Chortitza teachers college from 1923-1927. He instructed students in the subjects of Physics and Art.

During the summer of 1925, Jacob was summoned to the local police station. This was the start of the harassment by the Soviet authorities that Jacob endured and it would haunt him for the rest of his life. The family learned that Jacob was asked by the GPU (Soviet Secret Police) to become an informant. Jacob was to report on his fellow teachers at the Paedtechnikum. He tried as long as possible not to cooperate with the GPU. Jacob wrote favorable reports about the school to the GPU. This did not please the authorities who continued to pressure him. Eventually Jacob had to decide. If he did not cooperate, he would be considered a counter-revolutionary. He could become an informant or be continually persecuted. Jacob chose persecution.

Jacob decided to leave the teachers college to find work in the city of Dnipropetrovsk (formerly Ekaterinoslav) to avoid the interrogations. He taught at a technical school from 1927 to 1928. It was not long before the authorities located Jacob. The harassment continued. Jacob left his teaching position, moved back to Chotitza, and found work in a factory school where he taught the students general knowledge courses.

Jacob Sudermann was imprisoned from February to June 1933. His freedom did not last long. He was arrested in November 1933 and taken to Zaporozhe. He was subjected to harsher interrogations but later told his brother that he never signed any confession of guilt or admitted to any of the accusations. At the beginning of 1934, Jacob was taken to Dnipropetrovsk. In April he was taken to Charkow were he was placed before a tribunal (Trojka) and sentenced to five years in a "Labor Camp." Jacob was transported to the eastern Siberian city, Svobodny, some 9,000 kilometers from his home.

Jacob found work in the camp as a draftsman. He had access to paint and paper. He comforted his family with messages of love that he wrote on the backs of paintings that he was allowed to send home. Jacob coped with camp life by creating sketches and paintings of landscapes, animals and architecture on scraps of paper he found. Many of these paintings were later brought to Canada by his family. Jacob wrote letters to family describing camp life, his love of nature, and his love for family. He reminisced about his childhood. He also revealed the torment he suffered about his destiny. How could an innocent person be arrested, convicted on false charges and sent to prison?

In October 1937 the Sudermann family received word that he was being sent to another camp to perform menial labor. This was the last time they heard from him. In 2003 family members learned from the Canadian Red Cross that Jacob Sudermann was executed on 15 October 1937.

Memorial Society of Russia. "Perpetuating the Memory of the Victims of Repression."  Web. 16 May 2013.  https://www.memo.ru/en-us/.