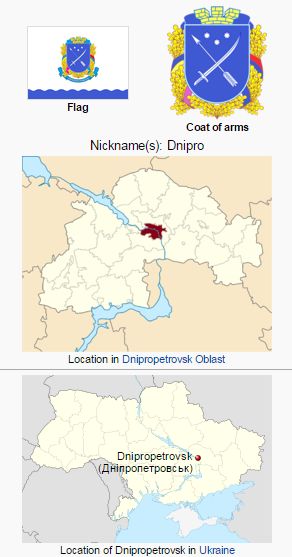 Dnipropetrovsk (Ukrainian: Дніпропетро́вськ) or Dnepropetrovsk (Russian: Днепропетро́вск), originally Ekaterinoslav (Russian: Екатериносла́в, Ukrainian: Катериносла́в), (pop. 500,000 in 1953, pop. 979,046 in 2015; coordinates: 48° 27′ 0″ N, 34° 59′ 0″ E, or 48.45, 34.983333), the capital of the province of the same name (now known as Dnipropetrovsk Oblast) in South Russia (now Ukraine), on the right bank of the Dnieper, founded in 1787. It was the largest city in the vicinity of the Chortitza Mennonite settlement, about 50 miles south, which was founded in 1789, and served as the business center for the Mennonites. In 1805 the Mennonite Heinrich Thiessen family was operating a vinegar distillery and later a steam mill in Ekaterinoslav. At about the same time, or perhaps a little later, came Heinrich Cornies and David Schröder, and then Heinrich Töws and Jakob Epp. The initial period of the Mennonite congregation ended with the coming of young Abraham Hamm and Heinrich Heese II, a son of the teacher Heinrich Heese, who was sent here as a student, and married into the H. Thiessen family. In 1889 there were in the city nine Mennonite families with about 50 souls. Ten years later there were 31 families with 158 souls. The rapidly growing milling industry, in which nearly all were engaged, kept drawing others from the settlements. At that time the following firms were in the business: J. H. Thiessen, Johann Töws, the Heese Brothers, and the Fast Brothers. The Mennonite group in the city was again augmented in 1919-1921, when many large estate owners sought protection from anarchist attacks there.