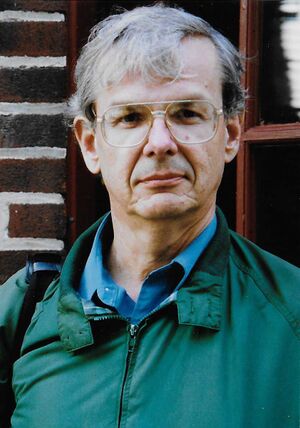 John Dale Suderman: administrator, businessman, and denominational critic, was born in Hillsboro, Kansas, USA on 24 April 1944 to Daniel M. Suderman (22 August 1907-14 December 2000) and Edna Harder Suderman (16 May 1907-18 December 1976). Dale Suderman was the second son and third child in a family of three sons and one daughter. He was never married. Dale Suderman died 5 January 2020, more than 11 years after suffering a debilitating stroke in 2008. He is buried in the Ebenfeld Mennonite Brethren Church Cemetery.

Dale Suderman grew up in the Ebenfeld Mennonite Brethren Church. He graduated from Hillsboro High in 1961 and Tabor College in 1965. After one year of political science studies at Wichita State University, he served in the military, 1966-1968. He was a legal and supply clerk at Fort Leonard Wood and Fort Rucker before serving nine months in Saigon, Vietnam from February to October 1968. After his military service, Dale worked as a social worker with the Aid to Dependent Children program in Wyandotte County, Kansas, for one year, 1968-69.

In 1970-71 he studied full-time at Mennonite Biblical Seminary (MBS) and then took a few courses each semester while he worked as associate director of the Partly Dave Coffeehouse in Elkhart, Indiana, 1970-1974. As part of this role, Dale counseled young adults and served as a liaison for them to various community services. He returned to MBS full-time, 1974-1975, and in 1975 he received his MA in Religion. Following graduation, Dale returned to Kansas as Associate Director of Mennonite Voluntary Service (GCMC), based in Newton, 1975-1979. He then became a community bookstore owner and manager (Logos of Chicago) in Chicago, Illinois, 1979-1989.

Following his work at the bookstore, Dale served in a variety of roles as a counselor. This emerged from his own life experience as a gay man who had worked for the General Conference Mennonite Church while in the closet. Dale was an alcoholic all his life and always open about his commitment to Alcoholics Anonymous. He was a heavy smoker. He hung out with radicals, conservatives, and sinners and didn’t judge them.

As a counselor, Dale Suderman worked first as a mental health counselor for two years in the psychiatric unit of the Swedish Covenant Hospital in Chicago, 1990-1992. He then did similar work for the University Hospital, 1992-1995. From 1990 to 2000, he worked for the Federal Community Corrections program of the Salvation Army with inmates returning to community living. From 1995 to 2005, he also worked for the Harbor Light Freedom Center, an outpatient Clinic, providing addiction counseling. Still with the Salvation Army from 2005 to 2008, he worked with their Correctional Services Program providing individual and group therapy to clients under the supervision of the US Probation Office.

Dale became very active in gay rights issues and a number of community organizations, including as a board member of the Urban Life Center, 1980-1987. Dale hosted groups from the Urban Life Center, where many young Mennonites encountered him at his bookstore during this period. He taught courses in men’s studies at Garrett Evangelical Seminary in Evanston. He gave many presentations and authored a number of essays in various publications. He wrote a newspaper column for the Hillsboro newspapers. After his stroke in 2008, he moved back to Hillsboro.

After his death, a hardboiled crime novel that he had co-authored with Daniel Born was published under the shared pen name David Saul Bergman. Unpardonable Sins (2021) featured an urban Mennonite minister who solves a murder on Chicago’s North Side.

His friend, Tim Nafziger, said that Dale "spent his life dancing on the margins of many different communities and weaving relationships with stories and wit."