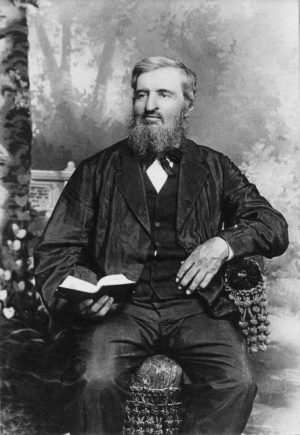 Jacob Stucky (1824-1893), pioneer, educator, min­ister, and elder of the Volhynian Swiss Mennonites in Poland and in America, was born in Volhynia, Russian Poland, on 25 October 1824, the eighth child of Christian and Katharina Mündelheim Stucky. He married Anna Waltner in 1849; eight of their children grew to maturity. His wife died shortly before the trek to America and on 2 May 1879, he married Barbara Kaufmann Voran. His descend­ants total over 1,335, of whom more than 1,200 are living in the United States and Canada.

Stucky was baptized in 1840 and elected into the ministry on 29 May 1851, and ordained as elder on 29 September 1862. During that year his congregation moved from Eduardsdorf eastward some 160 miles to Kotozufka and Neumannovka, in Russian Poland, where they were permitted to own land on condition that they clear it and build their homes in true pioneering. The Swiss Men­nonites established the churches of Zahorez, Horodyszcze, Waldheim, and Kotozufka in Volhynia. Kotozufka, the largest, was known as the Stucky Church. When they were barely established the policies of Russification and militarization dictated another move for conscience' sake. With the assist­ance of Jacob Goering, Stucky led his entire congre­gation (except two bachelors) of 73 families from Poland to America. They left their homes on 6 August 1874, and arrived at Peabody, Kansas, in approxi­mately one month. They later settled in the region around Moundridge, Kansas.

The congregation organized under the name Hoffnungsfeld (General Conference Mennonite Church). Here Stucky served faithfully until his death. He had a warm personality and was held in high esteem by the Swiss Men­nonites of the settlement. He served various kinds of Mennonite groups from Western Kansas to South Dakota. During the first six years in Kansas he baptized 142 persons, 60 of these in his home church, 56 at the Emmanuel Church, then known as the "Cantongemeinde," 20 at Pawnee Rock, and at Hartford in Lyons County, Kansas.

Elder Stucky was also concerned with bringing about orderly church life among many groups of Mennonites in Kansas, and played a part in the organization of the Kansas Conference. He pro­moted the cause of relief and Christian charity, especially regarding widows and orphans. He was also interested in Christian education, and pleaded in the press for a living wage for the instructor so that he could devote his full time to the cause. In 1877 he was elected to a "Committee of Seven" at Alexanderwohl to plan for a "Fortbildungsschule." He served on Kansas (now Western District) Con­ference committees. He was a member of the Chris­tian Education Committee from 1877 to his death. In 1887 he was one of the thirty-three who signed the Bethel College Corporation Charter. He died at Moundridge on 25 Apri 1893, and was buried in the Hopefield cemetery.